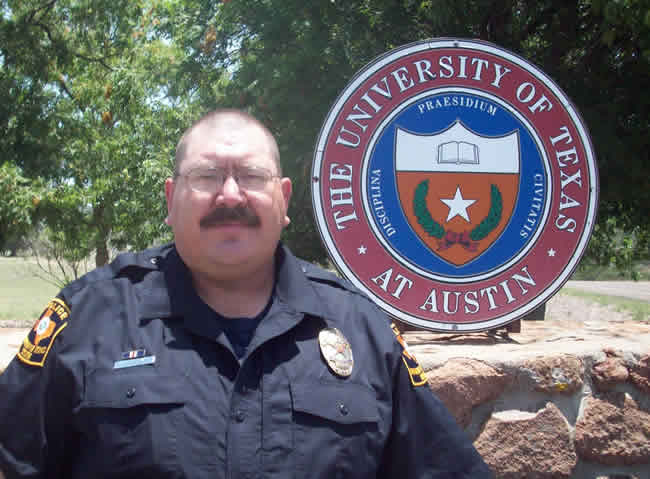 For seven years, Joseph Michael Pasqua has worked as a police officer and safety coordinator at the McDonald Observatory as the sole representative of UTPD in Fort Davis.

The observatory — intentionally located in a place far from bright city lights for prime star gazing — puts Pasqua about 430 miles from his UTPD peers.

Pasqua’s duties are wide-ranging. He serves as the operations chief for the Emergency Response Team, an animal control officer and a volunteer firefighter for the Fort Davis Volunteer Fire Department.

Pasqua started working for the observatory in 2006, coordinating with other law enforcement and emergency response teams, including the Jeff Davis County Sheriff’s Office, the Texas Department of Public Safety, the Texas Parks and Wildlife Game Wardens, Jeff Davis County EMS and other emergency care providers.

In December of 1990, Pasqua lost his partner after a shootout in the line of duty. Pasqua sustained injuries after being shot four times. Afterward he went on to help create the Big Bend Area Law Enforcement Fallen Officer’s Memorial.

Pasqua said Jeff Davis County, which is a sparsely populated area of roughly 2,300 residents, is one of the largest counties in Texas and the small, but spread out nature of the area means community support is important.

“All of our firefighters and emergency medical personnel are volunteers,” Pasqua said. “This is another way we give back to the citizens of our county and provide a safe place to live, work and visit.”

According to UTPD Capt. Julie Gillespie, nearly every officer working on campus knows about Pasqua — or Joe Mike, as they refer to him — even if they have not personally worked with him.

“He’s just a hard worker and he gives a lot of his time, both on duty and with volunteer work that he does out there with the fire[s],” Gillespie said. “He’s one of those guys that everyone likes to be around.”

UTPD Capt. Don Verett met Pasqua when he came to work for the police department and has gone to visit Pasqua at the observatory on multiple occasions.

“He’s hardworking, dedicated, he has a great sense of humor, he’s just an all-around good guy,” Verett said. “I think [what I admire most about him is] just his varied skill set that he has with being an all-around first responder … [and] his dedication to the people of McDonald Observatory and Jeff Davis County.”

Pasqua said he loves the diverse nature of his job but is most proud of the work he does engaging with the community.

“The most rewarding part of my job is being able to assist people in their time of need and being able to give back to the community in which I live,” Pasqua said.