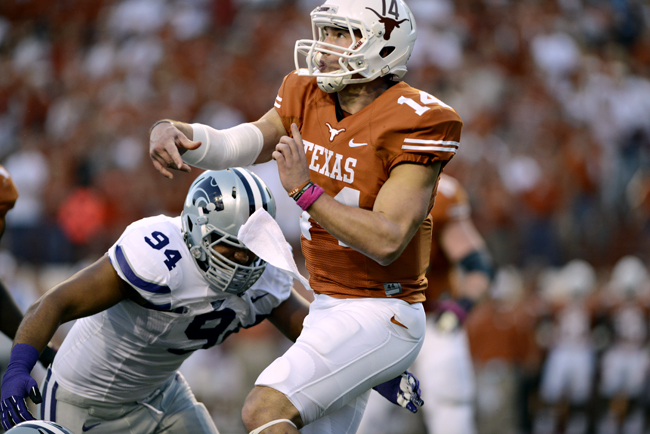 Ash missed three of the Longhorns’ last four games with lingering symptoms stemming from a head injury suffered on Sept. 7 against BYU. He has not played since starting against Kansas State on Sept. 21, a game he left after the first half because of returning concussion symptoms.

While he is inactive this week, Brown said Ash remains hopeful to play again in 2013.

“He didn’t practice Thursday, but he’s back involved with the team and [the training staff] said he’s making progress,” Brown said. “I actually asked him, ‘Do you anticipate playing any more this season?’ and he said, ‘Yes, absolutely.’ He feels like he will be back and ready to play at some point.”

Ash enjoyed a strong start to the season, compiling 760 yards and seven touchdowns through the air in three games. In those three games he managed to set a career-high with 152 rushing yards on 31 attempts.

Brown said it remains up to the trainers to deem Ash ready to play again. The quarterback must be cleared of symptoms a week before returning practice, making it difficult to put a timetable on when he could see the field again.

“If he is not cleared by Tuesday, then he doesn’t get to practice next Tuesday,” Brown said. “That’s how far out it has to be. I’m sure they are being cautious and want to make sure he is 100 percent well before they even think about letting him be back with us.”

While he continues to take a cautious approach and listen to the trainers, Brown admits he expected Ash to resume playing several times this season.

Instead, senior quarterback Case McCoy lined up under center in each of those contests. He played well through the Longhorns’ first six games, racking up 764 yards through the air while connecting on four touchdowns against just one interception.

McCoy gets the start again this week, with freshman quarterback Tyrone Swoopes serving as the backup. Brown refused to speculate on whether McCoy would continue to start should Ash return. He plans to address that situation once it presents itself.

“I think we have to wait and see when it is and see what the circumstances are,” Brown said. “Obviously Case has had two and a half good weeks here and played well. He played well enough on Saturday [against Oklahoma] that he sure deserves to keep playing. I don’t want to be hypothetical until we know that David is back.”