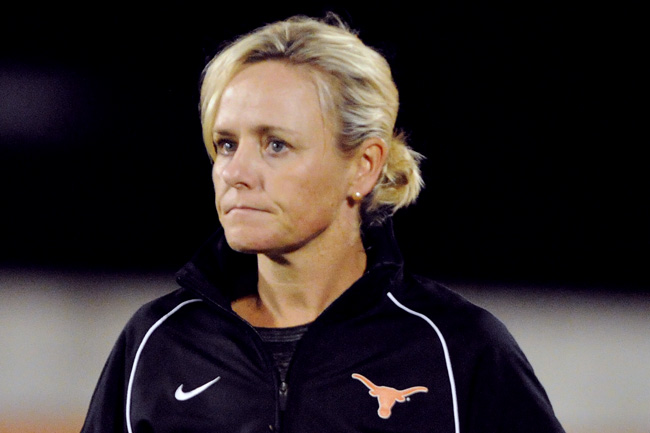 Angela Kelly is in her second season as head coach at Texas.

Sunday was Senior Day at Mike A. Myers Stadium, and Gabby Zarnegar and Brenda Saucedo took their last kicks on home grass.

It made for a nice moment at the first whistle when Saucedo, who rarely starts, got a huge hug from head coach Angela Kelly on her way off the field. Kelly is 11-4-2 in her second year at Texas and will likely have a second-place Big 12 finish and NCAA tournament berth to add to her already impressive resume.

Kelly came to Texas after a 12-year stint as head coach at Tennessee. The Tennessee Lady Vols had national recognition and success in just about every sport but soccer before her arrival, but Kelly built the group into title contenders.

There have been far too many college coaches fired or disciplined in the past few years for berating, abusing and even assaulting players. Most of them try and excuse themselves as passionate or old-school, but those excuses are just press-conference rationalizations for bad behavior.

Kelly is as intense as any coach. But before the pre-game huddle breaks and after the final whistle, she is as relaxed as she would be at a Sunday picnic with family.

She was all hugs and smiles at the pre-game ceremony for Zarnegar and Saucedo, and while Zarnegar will be sorely missed, every other major contributor from this team is expected back next season.

Add freshman Marchelle Davis to that group and that makes six starters who aren’t even taking upper-division classes yet.

Davis, Smith and teammates are fortunate to have a coach with the skills to make them better players, the experience to give words gravity and the ability to motivate and instruct in a positive manner.

It is a joy to watch this team play, and of course, winning makes everyone happier. When the field starts to tilt against the Longhorns, Kelly is at her best, orchestrating and encouraging all at once.

After last season’s 8-10-2 extended get-to-know-you session, Kelly and her team are clicking well enough to be an NCAA tournament team and perhaps the first UT squad to reach the Sweet 16 since 2007.

Regardless of how far into November the Longhorns can keep themselves on the field, this season has been a success. Usually it is fair to give a new coach four full seasons to get her own players onto the roster, but Kelly doesn’t seem to need that.

Next year the expectations will be much higher, but after what she did at Rocky Top, we know Angela Kelly isn’t afraid of heights.