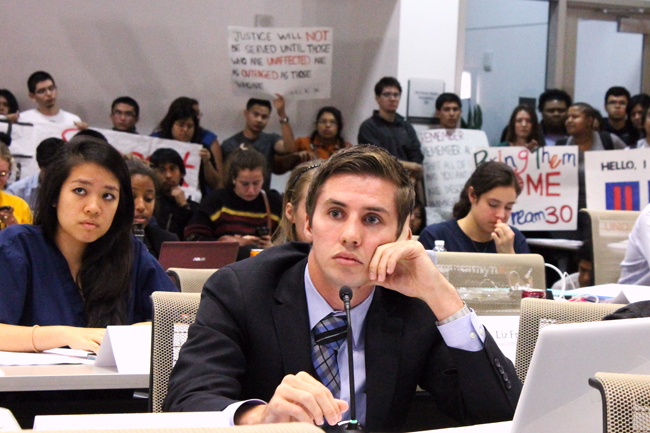 A resolution regarding undocumented students was passed by a vote of 18-9-2 at the Student Government Assembly meeting Tuesday, where over 50 students were in attendance in the gallery.

Leaders from Young Conservatives of Texas, Longhorn Libertarians and Republicans of Texas submitted a letter addressed to SG representatives asking them to vote against AR 16 Tuesday in order to provide a voice to the “silent majority” on campus.

During debate, Andrew Houston, architecture and urban studies senior and chair of the rules and regulation committee, moved to amend the resolution and change the title to “In Recognition of Undocumented Students and Undocumented Longhorns Week.” The amendment failed by a vote of 11-20.

“I believe that there are other ways to support undocumented students, both within the resolution itself and by actions taken by student government,” Houston said.

Government freshman Kallen Dimitroff said she thinks that by voting to pass the resolution, the assembly would be supporting an impassioned portion of the community.

“I think saying ‘yes’ speaks a lot louder of us and our character as student leaders than saying ‘no’ does,” Dimitroff said.

Christopher Jordan, McCombs representative and business and English major, said he thinks representatives opposed to the legislation fully support undocumented students but have issues with the wording of the resolution.

“I support this cause,” Jordan said. “What I don’t support is this resolution — this alarmingly partisan resolution.”

Jordan said he attended the Legislative Affairs Committee meetings discussing AR 16, and said members of the committee and authors of the resolution did not allow representatives opposed to the bill to make any amendments. Economics junior Stephen Vincent proposed an amendment during the final debate Tuesday to alter the wording of the resolution. The amendment failed following a vote of 9-21.

Danny Zeng, government and finance senior and president of College Republicans, said he thinks the resolution should be put up for a referendum.

“Take [this] into consideration: This is a political opinion, and I challenge the proponents of the resolution to tell me straight to my face that this has nothing to do with being political,” Zeng said.

In the debate, Ugeo Williams, SG vice president, said one of his close friends is an undocumented student.