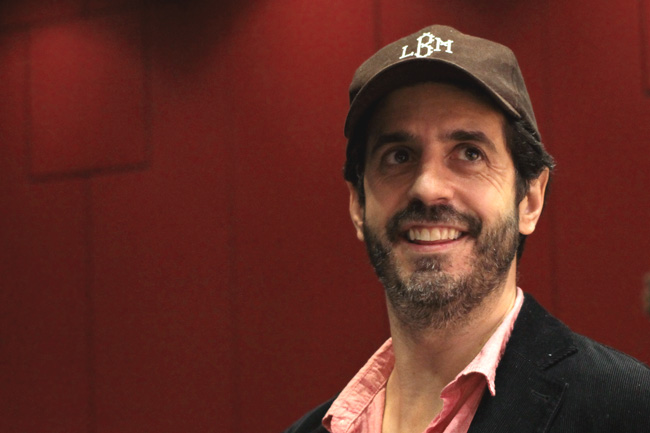 Magnum photographer Alec Soth speaks at the Belo Center for New Media on Wednesday evening as part of the Campus Conversation Lecture series. The award-winning photographer spoke about his inspirations, travels and challenges as a proffesional in the field.  " />

Magnum photographer Alec Soth speaks at the Belo Center for New Media on Wednesday evening as part of the Campus Conversation Lecture series. The award-winning photographer spoke about his inspirations, travels and challenges as a proffesional in the field.

Magnum photographer Alec Soth, who is known for his all-American approach, presented his widely showcased photos at the inaugural Campus Conversations Lecture on Wednesday.

“Soth was once a highly successful blogger that displays his work in an innovative way,” Hoelscher said. “His works represent the community life in all its uniquely American varieties.”

Soth is one of more than a hundred photographers that are part of the Magnum agency, which promote alternative mediums for photography other than magazines and combines the roles of reporter and photographer.

Soth talked about his entry into photography and how he created his photo-taking style. Soth also explained the changes occurring in photography in the digital age.

“The reason I became a photographer is I liked being alone and wandering around,” Soth said. “In the digital age, people are hungry for human interaction.”

Soth said his approaches in photography have changed throughout the years. His new project is focused on photographing Texas, and he explained photography he has shot across the nation, in places such as New York, Michigan and Mississippi.

“I take a different approach with each dispatch,” Soth said. “The Kings of the Road inspired me in my photography.”

Soth said photography allowed him to explore areas and capture what he wanted with each snap of the camera. He discussed a commission he made in Texas while photographing a young woman’s parents. Soth was flown out to Texas for the commission and was able to personally connect with the family. Soth’s current project consists of taking photos of cinemas throughout Texas, most of which have been transformed into modern day buildings and facilities.

“I become the photographer, producer and distributor,” Soth said. “Self-distribution will be large in Magnum’s future.”

Meg Askey, Director of Communications in the Office of Graduate Studies, helped organize the lecture.

“Soth talks about how magazine journalism is not the only platform for photography,” Askey said.

Hoelscher said the Magnum Photos Collection, which consists of images created between the 1930s and 2004, is now on display at the Harry Ransom Center.

“The collection displays some of the world’s most iconic photos,” Hoelscher said.