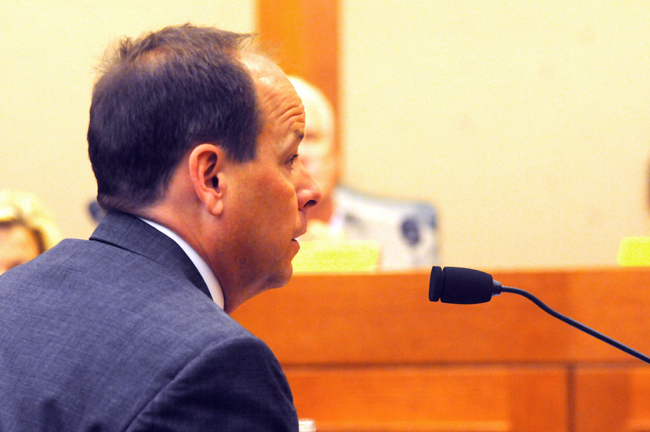 A former vice chancellor of the UT System was one of many witnesses Wednesday to testify that UT System Regent Wallace Hall has been targetting President William Powers Jr.

“I think there is a clear intent to get rid of Bill Powers,” said Barry Burgdorf, former UT System vice chancellor and general counsel, at the second day of hearings exploring the possible impeachment of Hall.

Hall might be impeached because he supposedly placed a burden on the University through the filing of multiple broad open records requests with the University. The records request total more than 800,000 pages worth of documents, which some legislators have called a “witch hunt” to oust Powers.

The relationship between the UT System Board of Regents and University administrators has grown tense in the past few years, including in November 2012, when former UT Law School Dean Lawrence Sager received a $500,000 forgivable loan from the UT Law School Foundation. The loan, which resulted in Sager’s removal as dean, prompted a review, which Burgdorf wrote prior to stepping down.

When some regents were unsatisified with the report, the board voted for an additional external investigation by the Attorney General’s office, after an original decision to hire an independent investigator proved unpopular with the Texas Legislature. Hall’s massive open records requests came in the weeks following this controversy.

Barry Burgdorf, former UT System general counsel, said Hall was displeased with the law school report Burgdorf produced because he thought it was not critical enough.

“It’s my understanding that Regent Hall wanted it to be more of a look at President Powers’s involvement,” Burgdorf said.

In his testimony, Burgdorf said the role of the regents changed when Gene Powell became chairman in 2011.

“Chairman Powell took the view that individual regents had the right to pursue whatever they thought as best, and he did not shape or constrain that,” Burgdorf said.

Burgdorf said he asked Hall about Hall’s motivation for requesting so many documents, but, as the former System counselor, Burgdorf could not elaborate to the committee under attorney-client privilege.

During his testimony Tuesday, Kevin Hegarty, UT’s executive vice president and chief financial officer, said he expressed concerns at the legality of responding to Hall’s multiple open records requests, but the UT System did not allow him to get outside counsel from the Attorney General’s Office.

Burgdorf said when he was general counsel, he would always grant requests for outside counsel. Rep. Trey Martinez Fischer, D-San Antonio and a member of the House Select Committee on Transparency in State Agency Operations that is conducting the hearings, expressed frustrations that System general counsellor Dan Sharphorn was not there to testify.

Officials have also questioned whether Hall failed to include information about lawsuits he was involved in when applying for the regent position.

Burgdorf said if there is evidence a regent is using his office in a detrimental way, that is grounds for impeachment. During testimony Tuesday, Rep. Jim Pitts, R-Waxahachie, said he thought there was sufficient evidence to impeach Hall.

As was determined by the committee in September, Hall’s attorney Allan Van Fleet would not be allowed to cross-examine witnesses during the hearings. The committee will reconvene Nov. 13 to continue discussions and hear testimony from additional witnesses.