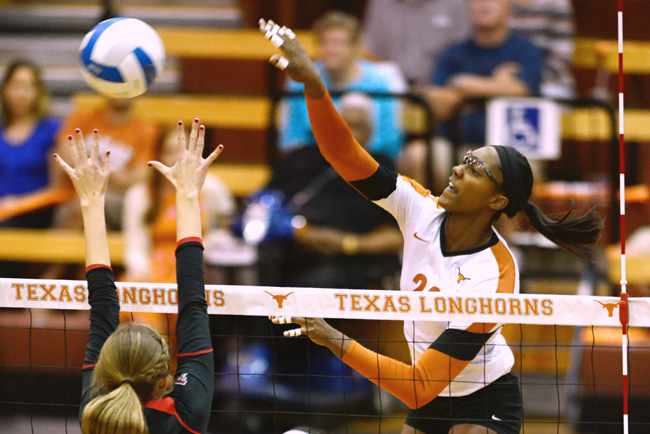 Senior outside hitter Bailey Webster notched a team-high 15 of the Longhorns' 48 kills in a three-set victory over West Virginia on Wednesday evening. Webster leads the Longhorns with 213 kills this season.

West Virginia was no trouble for Texas on Wednesday night, highlighting the wide gap between the top of the Big 12 and the bottom.

Texas (14-2, 7-0 Big 12) hit the ground running as it never trailed in game one. West Virginia (16-5, 2-5 Big 12) hung around though, until an 8-2 run propelled the Longhorns into the driver’s seat. The Longhorns hit a rate of .517 without committing a single hitting error in the opening stanza.

The second set, like the first, saw the Longhorns take an early lead taking advantage of Mountaineer errors. And they never looked back.

After an 11-5 lead midway through the set, the Mountaineers went on their lone run of the set. A 6-3 spurt helped them claw back into it, but the Longhorns never let the Mountaineers get to within three, and the set ended in a fitting manner with a Mountaineer service error, their fifth of the match.

West Virginia took a 17-14 lead late in the third set before Texas rallied three straight points with the help of another Mountaineer service error and a block assist from freshman middle blocker Chiaka Ogbogu and junior middle blocker Khat Bell. After pushing the lead to 21-17, West Virginia fought back pushing the game to extra points. The game went point-for-point the rest of the way before junior outside hitter Haley Eckerman’s kill clinched a 31-29 Texas win.

The trio of sophomore middle blocker Molly McCage and the All-American outside hitters Eckerman and Bailey Webster combined for 40 of Texas’s 48 kills as Texas swung at a .384 (48-10-99) clip, its best since opening up the conference season.

West Virginia, on the other hand, struggled, hitting just .239 thanks to 19 errors, which don’t even include its nine service errors.