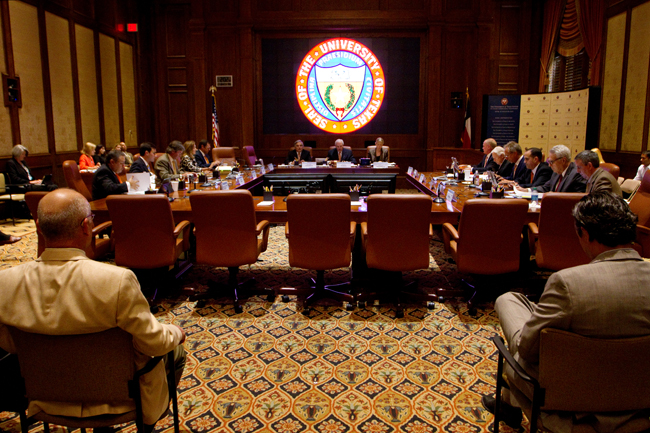 At a specially called UT System Board of Regents meeting Friday, Chairman Paul Foster requested a new examination of the board’s responsibilities and said he will likely recommend a new screening process for regent information requests at the board’s next meeting in November.

According to Foster, the new policy recommendations were in part prompted by the ongoing investigation of Regent Wallace Hall. Hall is being investigated by the House Select Committee on Transparency in State Agency Operations for allegedly placing a burden on the University with a series of broad open records requests spanning several hundreds of thousands of pages.

“In light of [the recent focus on best practices for state governing boards], I believe today is the right time to begin a new discussion on the best ways this board should operate going forward,” Foster said in the meeting. “I have spent [a] significant amount of time thinking about how we can fully discharge our responsibility in the most efficient and transparent way … I am sure each member of the board has done the same.”

Foster said he believes his final recommendations will center around re-examining the responsibilities of regents as investigators.

“[The recommendations will include] a process for review of requests for information that involves a determination concerning whether the information sought is necessary and likely to be beneficial to the discharge of a board member’s duties,” Foster said. “I envision the process will involve review … concerning the scope, timing and potential impact of the request.”

During testimonies heard by the transparency committee earlier this week, Kevin Hegarty, the University's executive vice president and chief financial officer, said his office was overwhelmed by Hall’s requests for more than 800,000 pages worth of documents. Hegarty said the requests were so overwhelming, the office had to hire more employees.

Open Records Coordinator Carol Longoria said she and her colleagues worked well past the end of a normal work day — often working until 10:30 or 11 p.m. — to process all of the requests.

Longoria said she was worried about the legality of producing all of the requested documents, some of which are protected with student privacy laws.

“I was very concerned that I was being unwittingly asked to do something potentially illegal, and I didn’t want to be a party to that,” Longoria said.

Hall’s attorney, Allan Van Fleet, said Hall made it clear he did not want to receive protected documents.

Another topic the transparency committee has focused on is Regents’ tendencies to use their own personal email accounts, rather than email accounts provided by the UT System. Foster said this is also an issue he hopes to address.

“Several members of the Board have asked about such email access, and [Francie Frederick, the Board’s general counsel] is working with System information technology staff on this issue,” Foster said.

The regents’ next scheduled meeting is Nov. 13 and 14.