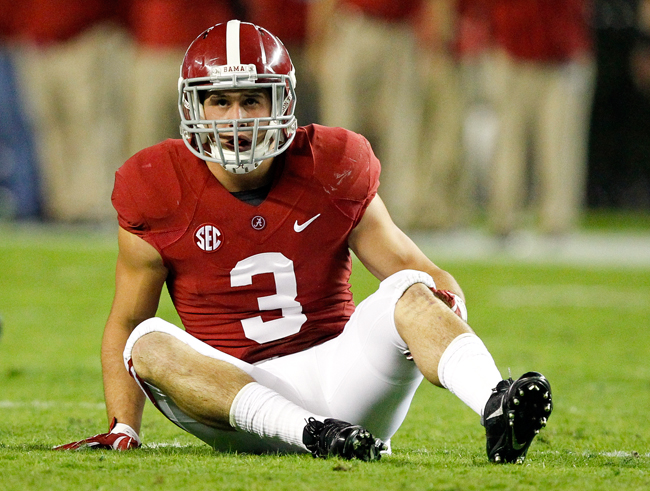 Despite crushing Arkansas 52-0, undefeated and top-ranked Alabama suffered another major setback in the injury department last Saturday as junior Vinny Sunseri, the Tide’s starting strong safety, was injured covering a kickoff. He was diagnosed with a torn ACL and has been forced to have season-ending knee surgery as a result.

A leader in the middle of Alabama’s star-studded defense, Sunseri had registered 20 tackles and led the team with four pass breakups and two interceptions, both of which he returned for touchdowns.

The Hurricanes dodged a bullet on Tuesday as the NCAA announced it will not impose any additional bowl bans on Miami, bringing the Nevin Shapiro scandal to a close.

As a result of “unprecedented” self-imposed sanctions, the NCAA elected not to levy any additional postseason ban on the Hurricanes, clearing the way for this year’s squad, currently undefeated and ranked No. 7 in the country, to make a run at a BCS bowl berth.

Miami did not come away completely unscathed. The NCAA took away nine total scholarships from the football team, three scholarships from the basketball team and placed the entire athletic program on three years probation. Several staff members from the Miami teams involved in the scandal were also punished, including former head basketball coach Frank Haith, who is now the head coach at Missouri. He was suspended five games.

The Grambling State football team returned to practice this week, after an almost week-long boycott by the players that resulted in the team forfeiting its game against Jackson State last Saturday.

The players, who staged the boycott because of many issues including poor facilities, difficult travel conditions and personnel decisions, voted together on whether or not to end the hiatus and all agreed to return to the field together. The boycott gained national attention and shed light on the lack of funding for historically black colleges and universities around
the country.

Texas A&M head coach Kevin Sumlin said he is “hopeful” that his starting quarterback and reigning Heisman Trophy winner Johnny Manziel will start in this weekend’s game against Vanderbilt.

Manziel injured his throwing shoulder in last week’s loss to Auburn and has been receiving treatment for the injury since. He has been wearing a sling in practice as a precautionary measure and will continue to be evaluated leading up to Saturday’s game.