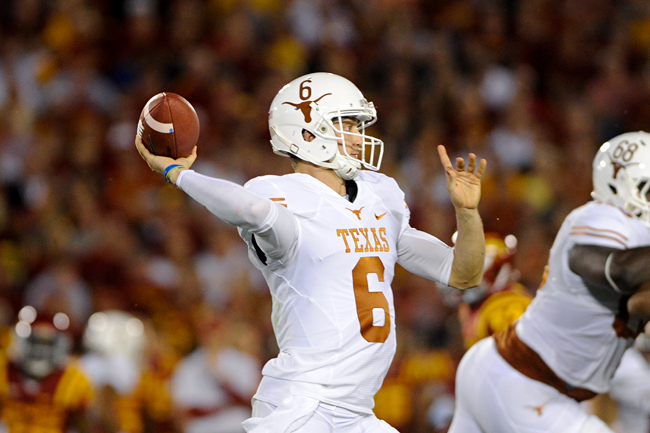 Case McCoy has always been in the background.

He grew up as the little brother of former Texas star Colt McCoy and has spent most of his Longhorns career as the backup quarterback. For Case, however, the chip on his shoulder has not been in the background—a chip that has helped define McCoy during his time as a Longhorn so far.

“It’s there,” co-offensive coordinator Major Applewhite said. “You know the little brother syndrome or the back-up quarterback syndrome. Whatever you want to call it. He certainly has a chip on his shoulder. And it doesn’t come out in just feistiness or words, it comes out in his preparation and his dedication to his teammates.”

When he was five years old, doctors caught a skin and muscular disease named scleroderma, which is a build-up of scar-like tissue in the skin. The senior said that chip he has on his shoulder started when he got that diagnosis.

“That was a disadvantage I was put at early,” McCoy said. “But at the same time, I don’t think I’d be here if it weren’t for it. It made me work harder, it made me want all of this more than I would have if I were a normal healthy child.”

Scleroderma isn’t the only outside factor affecting how McCoy looked at his life. This past summer, the quarterback spent 10 weeks in Peru on a mission trip.

McCoy helped purify water and installed water filtration systems while in South America. He spent time with underprivileged families and came to the realization on how lucky he was to be in the position he was.

“I took away a lot, about how blessed I am along with all of everyone living in this country,” McCoy said. “I realized how much people not only in Peru but in America would trade for my position anytime.”

While it can be hard to see at first sight, the mission trip had an impact on his football career.

When you play at a school Texas, it can be easy as a player to become overconfident, a feature some say McCoy exhibits too often.

“Around here you can love yourself pretty quick,” Applewhite said. “I’ve been a part of that, done it myself as a player, and you just have to fight it every day and focus on your team”

Nonetheless, McCoy has found that focus once again. With six games left to create his legacy at Texas, the senior has used his off-field activities as an advantage instead of a crutch.

“There was a time in there I was going through the motions and not relishing in the moment that I was living in,” McCoy said. “Once I realized that and realized I had one more year to do what I loved and continue to try and achieve this dream I’ve had for so long, that’s the biggest impact from it all. I was ready to get back as soon as that hit me.”