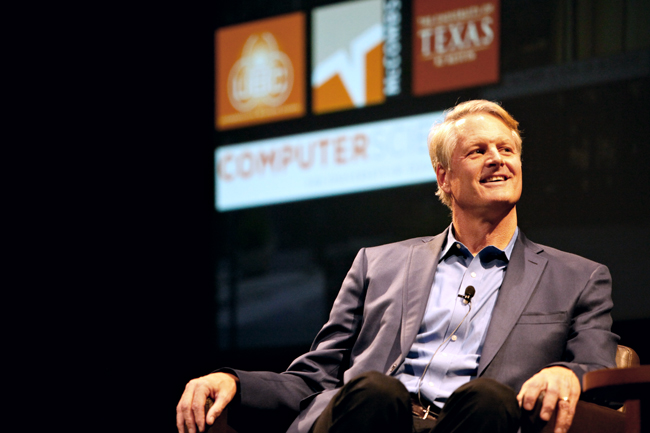 John Donahoe, president and CEO of Ebay since 2008, talked with students about the critical reception he received when he first joined Ebay and how it taught him the importance of staying true to personal values and taking risks. The talk was part of the VIP Speaker Series hosted by the Undergraduate Business Council.

Donahoe said the most important thing for young leaders is being able to learn and grow quickly. He said risks are not always rewarded at the time they are taken.

“Literally four days after becoming CEO, I stood up in front of an auditorium kind of like this, filled with Ebay sellers and said, ‘We are in a turnaround.’ And no one likes that,” Donahoe said.

Donahoe said Ebay had stopped innovating, so he started a multi-year process to change how the company functioned. Sellers were angry about changes that Donahoe instituted, including decreasing some fees but increasing the percentage that Ebay gets from the final price. Donahoe said he hit a low point when he looked up what Ebay sellers had posted about him on a YouTube video.

“He’s disenfranchising the sellers,” Arietta said. “Ebay, when it first started, they were selling unique stuff and fun stuff — collectibles. And now, for better or for worse, it’s turning into a mass market thing, which is good for shareholders and stuff like that, but they’re leaving their core ideas.”

Donahoe said he questioned whether he made the right decision to make substantial changes to the company, but decided he believed in what Ebay was doing.