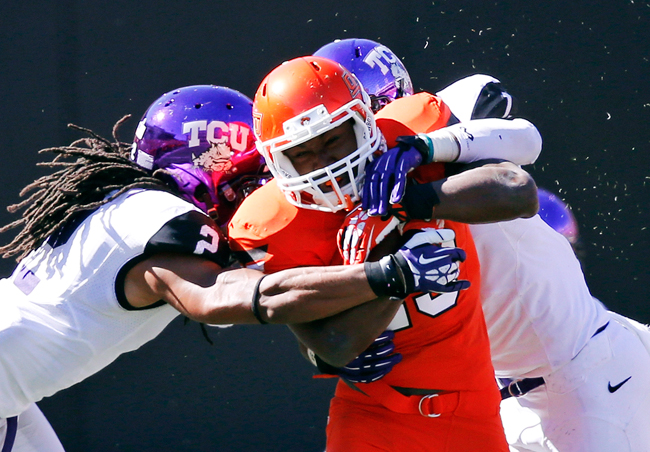 The Longhorns know they have a challenge on Saturday.

“For me, my side of the ball, TCU has an incredible defense, probably the best in our league, if not the best in college football right now,” senior quarterback Case
McCoy said.

And head coach Mack Brown made sure to note that, more specifically, TCU’s secondary is one of its most formidable units.

That great play Brown speaks of on the back end is in large part due to the outstanding play of senior cornerback Jason Verrett and junior safety Sam Carter.

Few would argue against the assertion that Verrett is the best cornerback in the Big 12. He was a unanimous preseason All-Big 12 selection after being named a first-team All-American last year by SI.com. He led the Big 12 with 1.69 passes defended per game, the second-most in the country.

“It gives you confidence knowing you can line up with him on the best,” TCU head coach Gary Patterson said. “He’s not the biggest corner, but he battles you and is smart about what he does. He learns on the field.”

While Verrett may be the Horned Frogs’ best NFL prospect on defense, he isn’t having the best statistical year on that side of the ball. That honor belongs to Carter.

“Sam is an amazing guy,” Patterson said. “Our safeties get themselves in good positions because they are really smart football players.”

Verrett, his partner in crime, isn’t just a cover corner. He was ranked sixth in the NCAA last year with six interceptions and he recorded 63 tackles. He was the only player in the nation ranked in the Top 10 in interceptions and passes defended.

But, for the former high school running back, it almost never happened.

Verrett ended up learning how to play cornerback at Santa Rosa CC (Calif.) and did it well enough to be ranked as the nation’s No. 6 JUCO cornerback, according to rivals.com.

The FBS interest didn’t follow, though, as he had expected.

He got no offers from a BCS school. A few from Mountain West schools such as Boise State, San Jose State and TCU, along with one from UTEP. Ultimately, he signed with the Horned Frogs.

His first start couldn’t have gone much worse.

Then-Baylor quarterback Robert Griffin III threw six touchdown passes against the Horned Frogs — the first three coming at Verrett’s expense. That was two more touchdowns allowed in his first game at the FBS level as he had surrendered the prior year in junior college.

He called his dad, mom, brother, former coach and Patterson to inform them his first game was going to be his last.

“I didn’t really wanna quit,” Verrett said a year later. “I was kind of lost. I was thinking of all the wrong things instead of just taking it as one game with 11 more to go.”

He learned from that game, one which Patterson still refers to as the “the one where [Verrett] wouldn’t come out from underneath the covers.” He handles adversity better. He’s learned to take things one game at a time.

Verrett is now a projected second-round pick in the NFL Draft and was named to the 2013 Lott Trophy watch list. He leads the team with 12 passes defended to go along with his one interception.

And, to think, he almost quit after his first game.