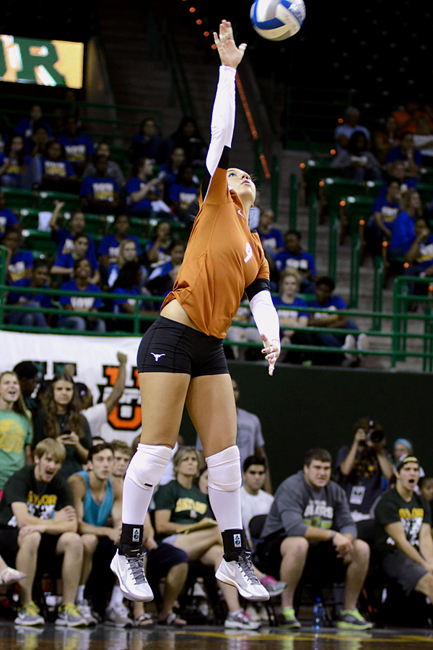 After a lot of close, tight matches in non-conference play, the Longhorns have coasted in conference play, winning all seven matches. Their offensive firepower is a heavy contributor to this record, but much is also due to their service game.

In the last victory against West Virginia, Texas (14-2, 7-0 Big 12) had three service aces and six service errors, compared to West Virginia’s two aces and nine errors. The service game is about more than aces. It’s about making sure the opponent can’t run a smooth attack following the serve.

In an attempt to accomplish this, Longhorn players use an array of serves.

Used by junior outside hitter Haley Eckerman, the jump serve is a fan favorite for its powerful nature. It starts out with a one-handed high toss several feet in front of the server and well above her head. Using a normal attack approach, the server jumps and attacks the ball in the air creating a hard, topspin serve.

Pros: Harder to handle for the opposing team because of the power.

Cons: Better chance of service error because of the extra motion and predictable path.

One of the more popular choices for Texas, the jump float moves in unpredictable ways. The serve is a hybrid of the jump serve and the floater. The server tosses the ball with — though not as high as the jump serve — and she strikes it while she is in the air with an open palm to create no spin. Typically, the server runs without tossing the ball much higher than the striking point. Ideally, the ball should catch the air, moving unexpectedly to the right, left or down. Sophomore defensive specialist Kat Brooks, senior setter Hannah Allison and sophomore outside hitter Amy Neal use this serve.

Pros: More control and the unpredictable nature makes the path hard to predict.

Cons: The ball will often float out of the back as it carries more than a topspin serve.

Only used by senior libero Sarah Palmer, the deep float is the furthest serve. Instead of striking the ball from the service line, like nearly every other server, Palmer will stand a few feet back from the line to give her standing float serve more time to move. The ball behaves in a similar manner to the jump floater, but with less power and less of a downward trajectory. The ball still moves unexpectedly and has no spin.

Pros: The length of the shot allows for more movement.

Cons: Further distance to hit can allow for the service error.