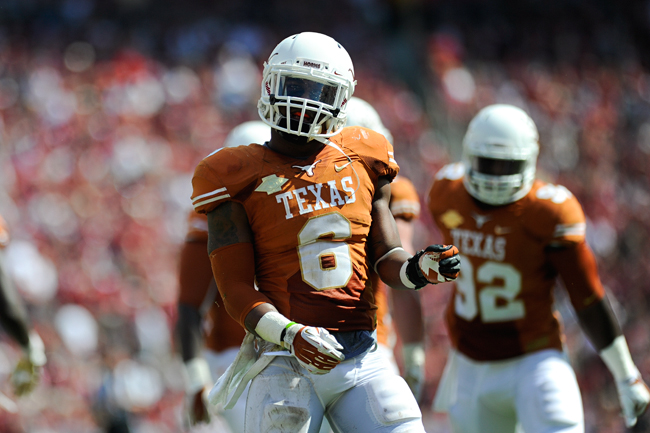 Motivation is simply defined as the force that compels us to action.

For Texas, that force this season has varied from game to game but one of the biggest motivational techniques used has been the negative attention surrounding the program since their 1-2 start.

“I don’t care what level of football it’s on, there is a time when players need external motivation from the outside,” defensive coordinator Greg Robinson said. “I think there are a lot of people that are that way. That is just part of the deal.”

In their games against Brigham Young University and Ole Miss, the Longhorns were favored by seven and 4.5 points, respectively. Needless to say, Texas lost both of those games causing a media uproar of negative attention towards the team.

In its narrow victory against Iowa State, Texas was at one time a 10-point favorite before settling the spread at eight points. In that game, the Longhorns only came away with a one-point victory.

When the tides are turned, however, Texas seems to fuel off the idea it is an underdog. Against Oklahoma, the Sooners were two-touchdown favorites. Neither team had been favored to win by more points since Texas was a three-touchdown favorite over Oklahoma in 1996. The Longhorns came out of Dallas with a 36-20 win, their first in four years, despite nobody outside their locker room giving them a chance to win the game.

“It’s not about doubters and haters, but you always have that chip on your shoulder,” senior defensive end Jackson Jeffcoat said. “That’s what motivates you, keeps you going to do your best.”

Going into its game against TCU in Fort Worth this weekend, Texas is once again the underdog, as the Horned Frogs opened the week favored by three points.

“Having your brothers around you, we have a great team here, a bunch of guys that want to do the same thing, have a common goal,” Jeffcoat said. “We’re all excited for this game.  We’re all ticked off.  We just want to show that we’re a good team.  We have a good defense, a good offense and we can play with anybody.”

Each player obviously has their own motivation and whether or not being the underdog proves that factor is up to the athlete.

“I personally love underdogs,” junior defensive end Cedric Reed said. “I love being underrated.  Playing with a chip on your shoulder is the way you play football.”

On the other hand, some believe using the negative attention as a motivation factor can be a sort of a crutch.

“I think everybody does that to a certain point,” senior offensive guard Mason Walters. “But I think if I had to rely on somebody else to get me motivated then I’d be fighting an uphill battle all the time.”

Either way, Texas believes it has to take the confidence it gained from the Cotton Bowl and leave any media attention it gets alone.

“We’ve been talked about bad enough for a long time this season,” junior wide receiver Jordan Shipley said. “You have to take it the same whether people are talking good about you or bad about you. You can’t really buy into any of that. But we have gotten confidence within our team. We don’t need anybody outside telling us how good or bad we’re doing.”