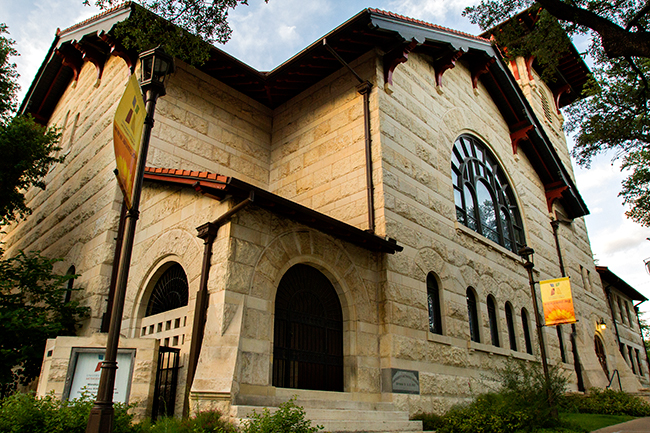 As a campus with limited room for expansion, UT has grown around neighboring privately owned properties that now sit on campus and have formed an unintentional border for campus expansion.

As the University continues to grow far beyond the original 40 acres, its relationship with properties along the edges of the UT campus has evolved as it has tried to make use of available space. While the University has resorted to using costly and drastic measures to force some entities out in the past, it has mostly tried to retain the long-standing community connections the properties — mostly churches — have built over time.

These entities — many of which were built early in UT’s history — sit next to other UT buildings and appear like part of campus along Whitis Avenue, Guadalupe Street and University Avenue. They are not owned, operated, maintained or overseen by the University in any way, but they have interacted with the University and its students in several ways.

“The University has expanded far beyond its original footprint when it was founded,” UT spokeswoman Tara Doolittle said. “Those [surrounding properties] are not UT property but they are part of the community.”

Architecture professor Larry Speck said the University has borrowed from the architectural design of the nearby churches as the University has implemented the Campus Master Plan, which includes plans for future buildings and goals for maintaining existing buildings and infrastructure on campus. The plan is meant to preserve architectural history on campus and the neighboring environment. Speck is a former member of UT Campus Master Plan committee.

The University United Methodist Church, at the corner of Guadalupe and 24th streets, was completed in 1909 with the familiar terra-cotta tiled roof, which is mimicked by many UT buildings and has become an architectural aspect for which the campus is known.

“This was, I think, the first building in the area to use the local limestone with a red tile roof to create a ‘Mediterranean feeling’ building,” Speck said. “That church that set a strong precedent for two generations of buildings to come on the campus and for the architectural character often associated with UT.”

Marc Erck, University United Methodist Church director of music and worship, said the building feels like a part of campus because of its matching style and consistent UT congregation, and the church building even hosted freshmen orientation in the 1930s and 1940s.

“It’s always been a center for religious activity for UT students since it opened and many of our members in their 80s were students at UT, landed here and stayed here,” Erck said.

For many of these historic buildings, their connection to the University has declined in recent decades.

The University Christian Church, located on University Avenue, just south of the Tower, was the first to offer accredited Bible study courses to UT students, providing classes at the facility on religious studies from 1908 to 1987, according to church historian Nancy Bessent.

Austin Presbyterian Theological Seminary, one of several churches bordering north edge of campus, maintains a close relationship with UT through a joint-degree program, according to Kristy Sorensen, seminary associate library director and head of archives and records management.

The church participates in a dual-degree program with the School of Social Work, which provides both a master’s of divinity from Austin Seminary and a master's of science in social work.

President William Powers Jr. also served as a member of the church’s Board of Trustees from 2004 to 2010. During that time, Powers was the dean of the School of Law, before becoming president in 2006.

“The two campuses were not adjacent in 1907, since UT’s original 40 acres ended at 24th Street, but we have gotten closer in proximity as the University has expanded to the north,” Sorensen said. “In 1966 and 1967, seminary property east of Speedway was sold to UT under threat of use of power of eminent domain.”

Eminent domain is the right of a government or its agents, including the UT System Board of Regents, to condemn or legally obtain private property for public use, according to Texas property law and condemnation proceeding rules. UT was first granted permission to use eminent domain in 1965 to acquire property along the north, east and south borders of campus as the University grew expansively, according to the Texas State Historical Association.

UT System spokeswoman Jenny LaCoste-Caputo said the last time the UT System used eminent domain to condemn a property was nearly a decade ago in 2004 in a case at UT-Pan American.

“The eminent domain process, which is expensive, is not used very often,” LaCoste-Caputo said. “Eminent domain proceedings are used only as a last resort and usually come after a long period of negotiations for the sale of the property have failed.”

Also in 2004, the University attempted to use eminent domain to obtain a property adjacent to the AT&T Conference Center to use as a parking lot. The property owners of the land, where Players restaurant is located, were not willing to sell at the time, and were supported by members of the Texas House of Representatives, which passed legislation blocking the acquisition. UT System policies now prohibit the use of eminent domain for parking or lodging areas.

Since the Players deal, Amy Wanamaker, campus director of real estate, said the University is not currently in discussions with landowners to purchase property near the conference center, but it’s open to potential purchases of properties near campus — subject to an acceptable agreement and approval by the Board of Regents.

Wanamaker said instead of reaching out to nearby property owners for potential land purchases, sellers near campus often contact the University if they are considering selling their properties.

“We do purchase properties from a willing owner, if it meets our campus needs and we reach agreement on terms,” Wanamaker said. “We are not currently looking at purchasing property but are always open to considering purchases near our campus.”