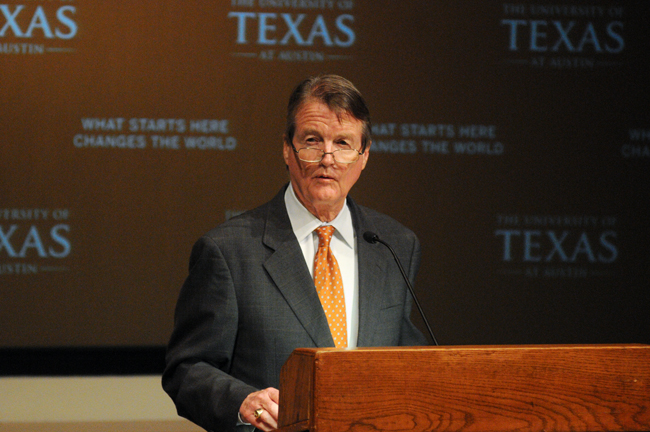 UT President William Powers Jr. recently delivered his annual State of the University Address to the University community, wherein he highlighted several of his accomplishments over his tenure as president and his vision for making UT the best public institution in the nation. Some of the things he noted:

* Since 2009, the fall semester course failure rate has dropped by nearly 50 percent

Powers has led UT to these accomplishments despite a historic economic crisis, increasing enrollment, decreased support from the state and stagnant tuition revenue. Costs are going up while revenue remains flat, forcing significant budget cuts in the past several years. These cuts have hurt UT’s academic and extracurricular offerings, and thus have hurt students.

To provide another perspective on the funding picture, the Texas Legislature cut $92 million during the 2011 legislative session. It restored only $20 million of these cuts during the 2013 legislative session, and nearly all of that $20 million has to go to mandatory cost-of-living adjustments and pension increases. Out of other large public universities, UT has the lowest per-student, per-year support from the major funding sources of tuition, general revenue — or state appropriations — and the Available University Fund — UT’s endowment — combined. It would take an additional $26 million per year in the budget for UT to tie with Michigan State University for last place, an additional $136 million per year to reach the median of the group and a staggering $527 million per year additionally for UT to tie the University of North Carolina at Chapel Hill for first place. These figures, in contrast with UT’s rankings, speak to Powers’ ability to lead UT to international prominence with the fewest resources available to a public, Tier One research institution. This level of efficiency is a major accomplishment; it should be celebrated by students as a testament to Powers’ ability to keep costs to students down while at the same time improving UT as a whole.

On Tuesday, Powers assumed the chairmanship of the Association of American Universities, the nation’s premier organization of Tier One research universities. Powers was elected chairman of that body by his peers, the presidents of the 61 other association-member universities. This gives Powers a prominent position to shape national higher education policy. The Senate of College Councils and Student Government recently passed Joint Resolution 1: In Support of President Powers’ Vision for The University of Texas at Austin, which highlights many of Powers’ accomplishments and his vision for UT in the changing landscape of higher education. This resolution is meant as a show of support to Powers from students as he assumes his new leadership role and shares UT’s very successful model with the rest of the nation.

The recent uptick in rumors about Powers’ job security is concerning to us as student leaders, and frankly, it is shameful that the UT System Board of Regents has not acted to dispel these rumors and instead has allowed them to continue. Pamela Willeford, a former U.S. ambassador in the Bush administration and former chairwoman of the Texas Higher Education Coordinating Board, recently asserted in an e-mail obtained by the Texas Tribune that a former chief of staff of Gov. Rick Perry said the governor’s office and the regents were attempting to oust Powers simply “because [they] can.”

The House Select Committee on Transparency in State Agency Operations, which is investigating Regent Wallace Hall to determine whether or not to move to impeach him in response to massive open records requests, sent a letter to the Board of Regents in which representatives warned the regents not to make any personnel decisions until their investigation was complete, a move that signals that Powers’ job may be at stake. And during testimony in that House committee Wednesday, Barry Burgdorf, former general counsel to the UT System, testified that the “clear intent” of some of the regents was to “get rid of Bill Powers.”

Our concerns are made sharper by Powers’ significant achievements during his tenure and in recent years. In fact, Chancellor Francisco Cigarroa, the chief executive of the UT System, stated in a Texas Tribune interview in March 2013 that, in terms of the Chancellor’s Framework for Advancing Excellence, Powers was doing his job, and touted a number of Powers’ accomplishments. We appreciate Chairman Paul Foster’s recognition of a need for policy changes in how the Board of Regents conducts its business, which he made last Friday in a statement to the Associated Press prior to a closed-session meeting of the board. But we hope this is only the first of many steps to mend the relationship with our campus.

Time and time again, Powers has been willing to stand up for the students of UT and has worked tirelessly to make UT a better university. We should be prepared to stand with him.