Allison looks at new role as Texas continues through Big 12 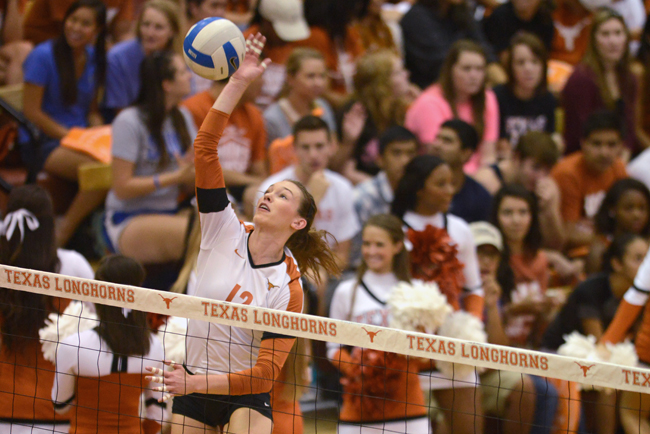 After starting senior setter Hannah Allison in each of her first three years at Texas, head coach Jerritt Elliott has handed the starting reigns over to freshman Chloe Collins this season.

Nearly 11 months after the clincher, the championship rings finally arrived for the 2012 national volleyball champions Monday.

But head coach Jerritt Elliott still hasn’t put his on.

Has he tried it on?

What is he waiting for?

For the rest of the team, though, the wait couldn’t have ended soon enough, especially for senior setter Hannah Allison.

“They are kind of huge,” Allison said with a grin. “They couldn’t be the same size as our Big 12 ring, so they had to go a notch up.”

But things have changed since Texas celebrated in the confetti of triumph last winter. There was no doubt Allison was the starting setter of last year’s team. This year, that’s not the case.

Freshman setter Chloe Collins has come in and outplayed Allison.

“Chloe is our starter,” Elliott said. “We go with who’s been doing well in the gym.”

So, for the first time in her career, Allison is not the starter. As a freshman, she started 16 matches before an ankle injury in early October curtailed her season. As a sophomore, she started 28 of 30 matches. As a junior, she started 31 of 33.

Time and time again, Elliott has proven he is not afraid to go with the freshman over the seasoned veteran.

“Last year we won with freshmen Nicole Dalton, Molly McCage and Kat Brooks,” Elliot said. “Sometimes you need to rely on the freshmen.”

But the competition in the gym is improving both setters’ game.

It’s that competition in the gym that has made Texas a Big 12 powerhouse.

“It’s kind of crazy how competitive our gym can be,” Allison said. “Our B side continuously beats our A side. I don’t know what other team can say that.”

Could the B team compete for a Big 12 title?

“Definitely,” Allison said with a chuckle.

“We work on getting better every day and finding something to improve on in every Big 12 game to get ready for the tournament,” Allison said.

But when the starting lineups are announced, it will be Collins throwing out the volleyball, not Allison.

“I’m competitive enough that I care more about winning than how much I play,” Allison said.