Daryl Dixon: How one crossbow-wielding redneck became a legend of zombie horror 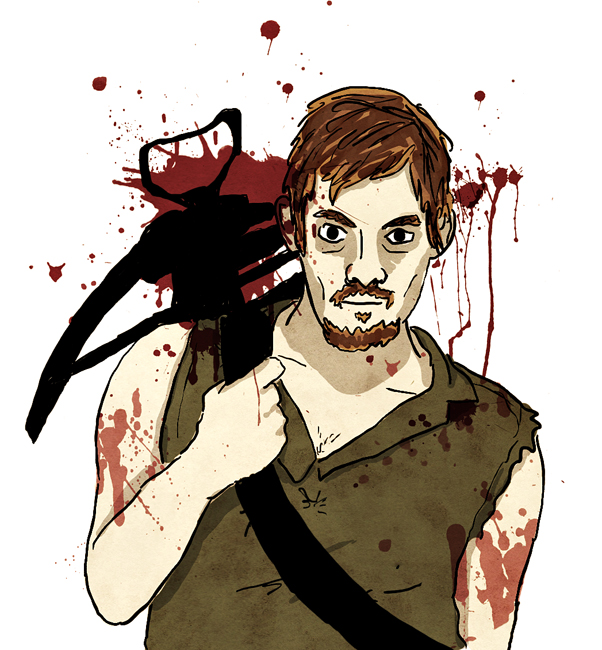 The fences are falling, disease is spreading and the Governor’s wrath hangs like a shadow over Rick Grimes and his not-so-merry band of survivors in season four of AMC’s “The Walking Dead.” Showing no signs of slowing down, the hit zombie drama continues its mean streak of solid, action-packed episodes. With so much zombie action on display, it can easily be assumed that Daryl Dixon and his trusty crossbow will be in the fray.

Played by Norman Reedus, Dixon is “The Walking Dead’s” breakout character, becoming the hero that zombie fiction both deserves and needs. With his forever-sleeveless shirts and squinty steely-eyed gaze, Dixon is the go-to redneck for surviving a zombie apocalypse. But behind this hardened survivor lies a heart of gold that makes this warrior of the field and stream so endearing. Plus he kills zombies with a crossbow.

Reedus’ nuanced performance as Dixon has only improved with age. First appearing cold and distant, Dixon was quickly revealed to be a character with an uncanny sense of compassion and loyalty. His dedication to both his brother and his adopted family of survivors is a truly remarkable trait in a world rife with darkness. The surprisingly tragic death of his brother, Merle, in season three was a standout moment for Reedus, unleashing the younger Dixon’s built up emotions in a powerful display of grief. Since Merle’s departure, Reedus infused Dixon with a newfound sense of independence and dedication to his fellow survivors, no longer tied down by his compulsory allegiance to his brother.

Despite Dixon’s ultimate success within the series, the writers may have backed themselves into a corner. This show thrives on the unpredictable lifespans of its characters, but at this point, to kill Dixon would be like killing the show. This is an unusual case because Dixon’s arc is very appendicular to the story as a whole. At the same time, to take Dixon out of the show would be like taking the island out of “Lost.” So what will the writers do to compensate for the fact that everyone but the redneck, whose ammunition reload time is modest at best, is getting devoured by the undead?

One answer would be to kill Grimes. While taking its cues from Robert Kirkman’s comic series of the same name, the show is not a direct adaptation. Characters like Andrea and Sophia meet horrible ends in the TV series while their comic counterparts still live and breathe, but killing Grimes would be a twist of Ned Stark-ian proportions. Despite Dixon’s skyrocketing popularity, Grimes is the protagonist of the series. The show thrives on his journey and to take away that vital aspect would be a thematic train wreck. People may watch the show for the zombie kills and the ensuing gore, but at heart, these would mean nothing without the loss of humanity that Grimes so perfectly exudes.

Grimes and Dixon present this odd symbiosis between thematic integrity and dedication to fandom and to take away either would ultimately be detrimental to the series. The show needs Dixon for the sweet zombie kills, but it needs Grimes for everything else. Though Dixon’s lifespan may be impossibly limitless, the macabre minds behind the show will create fresh reasons for the character to continue breathing.