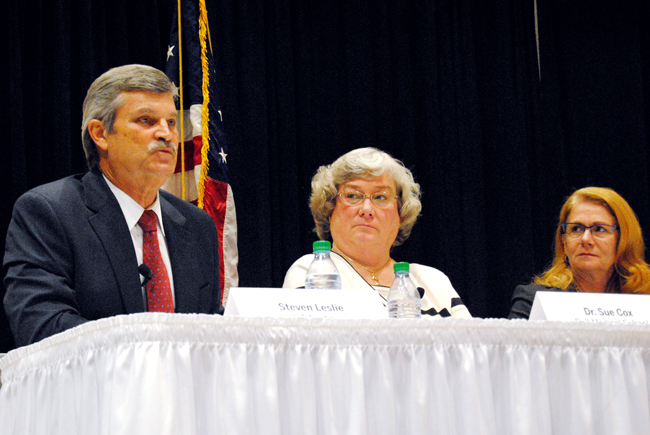 The Dell Medical School is in the final stages of design and planning, and construction of the first set of facilities for the medical district is set to begin on schedule in a few months. The development of the medical curriculum and the search for a dean and other faculty members are in an ongoing state of evolution.

An open forum, which took place Tuesday in the Student Activities Center, featured discussion among panelists regarding the current state and future of the Dell Medical School.

The panelists included administrative faculty from Dell Medical School and UT, along with representatives from Seton Healthcare, the American Heart Association and the president and CEO of Central Health.

According to a study by TXP Inc., an Austin consulting firm that specializes in economic analysis, the school will bring in an estimated 15,000 additional jobs and $2 billion in economic activity each year.

UT spokeswoman Tara Doolittle said the event was an opportunity to update the public on the work happening to create the new school.

“We are approaching the first anniversary of the successful passage of Proposition 1, which allowed Central Health to dedicate a portion of their tax revenue to health care initiatives related to the medical school,” Doolittle said. “Without it, the medical school would not have been possible.”

The forum addressed a broad spectrum of issues, including the medical school’s predicted significant contribution to innovation in the current health care system.

Steven Leslie, former UT provost and special assistant to the president for medical education, said the health care system is one of the gaps in medicine that currently needs attention.

“We are heading into new territory with the Affordable Care Act,” Leslie said. “[Dell Medical School has] the economic efficiency and the excellence of our community base, so we can utilize that to shape health care policy.”

“We have students go to architectural planning meetings with their input, and there are students on all of the committees,” Cox said.

The search for Dell’s founding dean began in April 2013, and the details of the position were released in June. The school is taking local doctors’ information for prospective faculty.

The design development plans will go to the UT System Board of Regents in February 2014 for approval. The medical school, the first to open at a Tier 1 university in nearly 40 years, will begin accepting applications in June 2015. The construction is expected to finish in early summer 2016.