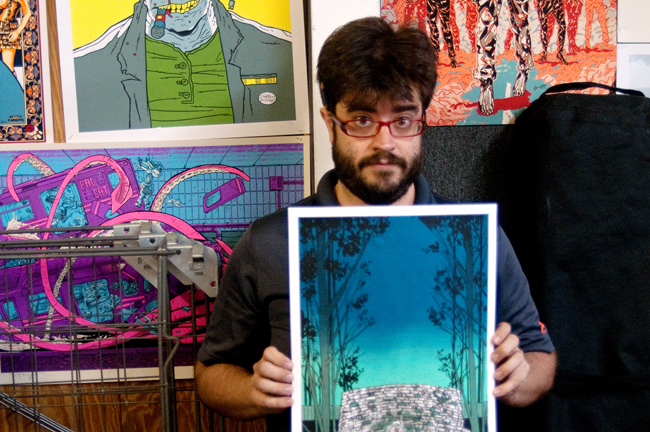 Tim Doyle, print screen artist and owner of Nakatomi Incorporated, designs art prints inspired by his passion for comic books. Doyle personally signs each piece and has created visuals for a variety of companies including Disney’s lost poster project.  " />

Tim Doyle, print screen artist and owner of Nakatomi Incorporated, designs art prints inspired by his passion for comic books. Doyle personally signs each piece and has created visuals for a variety of companies including Disney’s lost poster project.

Not every comic book fanatic has the opportunity to turn a passion for superheroes into a medium of expression. But Tim Doyle, local graphic artist and founder of Nakatomi, Inc., transformed his passion for comic books into a successful artistic career.

“Comic books [are] a visual storytelling medium,” Doyle said. “You can’t do it in film, you can’t do it in a book. It’s like a synthesis of the two that I believe is actually a better way to tell a story. With a comic book, if you can draw it, that story’s happening. It’s one guy’s vision delivered completely to the audience without any edits or compromises. [My artistic style] is definitely influenced by comic books.”

In 1999, after moving from Dallas to Austin, 22-year-old Doyle worked odd jobs to support himself while selling his art on the side. Whether he was waiting tables, working as a cook at the Alamo Drafthouse or working at a comic book store, Doyle was determined to get some recognition in Austin galleries. But he realized the gallery market did not align with his own personal values.

“You had to make artwork to sell to people who could afford to drop $2,000 on a painting for it to make sense,” Doyle said. “Whereas if you do a print you can sell to anybody because it cost 30 or 40 bucks. I couldn’t relate to the people who could spend $2,000 on a painting, you know? I didn’t even know who these people were who were buying my work. I was not making it for them, I was making it for people like me.”

Doyle’s work is not something typically found in an art gallery. His pieces are heavily influenced by comic book art, and they mirror the colorfully detailed worlds of technology and sci-fi.

Doyle also ran Mondo, the Alamo Drafthouse’s collectible art shop, for four years. After realizing he “was working 60 hours a week making somebody else rich,” Doyle decided to launch his own printing company. Using his business savvy from his years at Mondo, as well as his own artistic experiences, Doyle unveiled Nakatomi, Inc. in January 2009.

Nakatomi has blossomed into a retail site tailored to sell t-shirts, prints and silk screens designed by Doyle and other artists. A “multi-pronged beast,” the company has seen considerable success since its inception, and now has collectors in Australia, England and France. Additionally, in the summer of 2009, Doyle and fellow artist Clint Wilson constructed their own screen printing studio that started in Doyle’s garage, and is now headquartered in a warehouse space off Manor and Airport Boulevard.

“I first met Tim in 2011 after just moving to Austin,” artist Russ Moore said. “I was looking for someone to print my art, and a friend recommended Nakatomi. I was a fan of Tim’s work already, as I was a collector of screen prints. He can just as easily illustrate an entire comic book, paint a watercolor of Boba Fett or print a poster of a giant squid crushing a subway car.”

Doyle is currently preparing for an exhibit in Chicago that will showcase three of his pieces in December, and is also in the process of creating a concept for a solo art show next year. He continues to have high hopes for the future of Nakatomi.

“Everything’s moving really well,” Doyle said. “I [hope for] more of the same, which sounds kind of anti-climactic. [I want to continue drawing] just whatever crazy, stupid stuff I want to draw and hopefully people will keep buying it.”