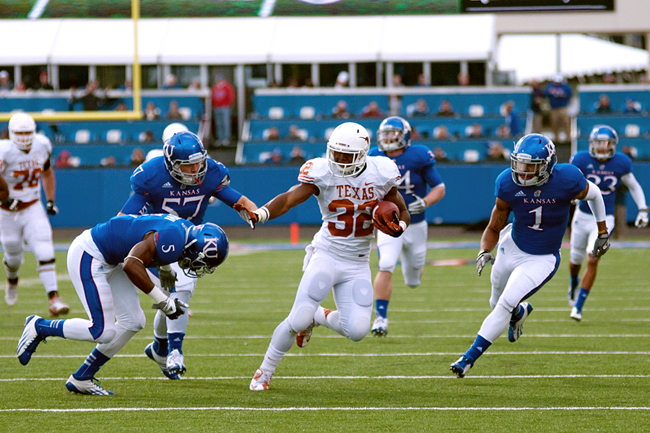 Sophomore running back Johnathan Gray will lead the Longhorns run game against Kansas this week. He has a team-high 679 rushing yards.

Kansas defeated Texas 12-0 in 1901 and again in 1938 by a score of 19-18. The Jayhawks haven’t beaten the Longhorns in the last 75 years. Since Mack Brown took over the Texas team in 1998, the Longhorns have made 14 bowl appearances, two more than Kansas holds in its program history. Brown’s teams have knocked off the Jayhawks eight times, by an average score of 44-12.

Texas is a perfect 10-0 against the Jayhawks in Big 12 play, and with the exception of road contests in 2004 and 2012; the games haven’t been competitive.

In four home contests under Brown, Texas cruised past Kansas with an average score of 55-9, by thoroughly dominating the battle on the ground, gaining 297.25 yards to just 47.75 allowed. With the successful implementation of the run game, the Longhorns wound up with easy third-down situations, converting 58 percent of them.

In contrast, for the two contests in which Texas trailed late and was forced to rally, the Longhorns struggled to stop the run and move the chains. In the two close contests, the Longhorns gave up 137 rushing yards per game and twice as many touchdowns on the ground, at an average of 1.5 to 0.75 yards rushed respectively. Kansas ran the ball more effectively at 3.3 yards per carry as opposed to 1.89, but the major difference lies in the volume of Jayhawk rushing attempts. In the close contests, Kansas attempted 41.5 runs per contest as opposed to 25.5 in big Longhorn wins.

When Texas had the ball in close games they ran it 41.5 attempts in close games, as opposed to 54 times per game at home. Falling behind like in 2004 or just general offensive struggles in 2012 were some of the reasons for the abandonment of the run, leading to a poor third-down conversion rate of 33 percent.

Texas’ offense is playing well on third downs against conference foes, converting 48 percent of attempts as compared to 35 percent in non-conference play when the team has struggled. Texas’ defense has played markedly better in conference play as well, surrendering only 122.75 rushing yards per Big 12 contest.

Kansas, on the other hand, only amasses 109.5 rush yards per game in conference play, the worst mark in the Big 12. Kansas will set the Big 12 record for consecutive conference losses — 29 — if it loses the remainder of its games in 2013, which it very well could. The Jayhawks have lost 36 of the their past 38 conference games.

Based on the Texas’ steady improvement and the Jayhawks’ regression, Texas should win this in blowout fashion with freshman quarterback Tyrone Swoopes getting plenty of game experience in the second half. But if the Longhorns overlook the Jayhawks or regress either offensively or defensively, the game may not be decided until the last drive like last season’s near debacle.