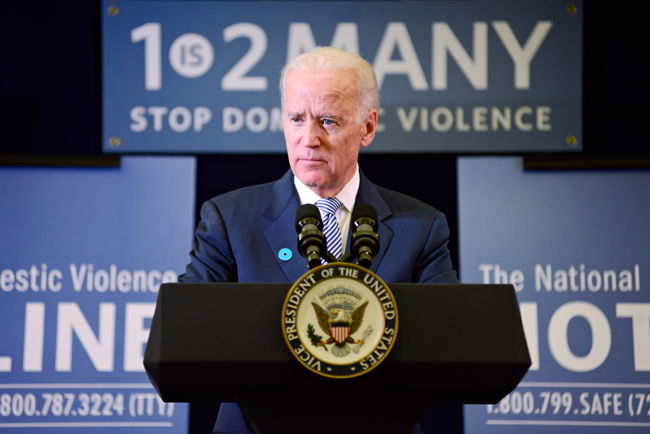 Vice President Joe Biden traveled to Austin to speak about the National Domestic Violence Hotline and the importance of funding an organization which helps victims find aid in situations of abuse. Funding was cut to $2.9 million because of the federal government’s budget sequestration in January, but Biden says the hotline needs $4.5 million to function. " />

Vice President Joe Biden traveled to Austin to speak about the National Domestic Violence Hotline and the importance of funding an organization which helps victims find aid in situations of abuse. Funding was cut to $2.9 million because of the federal government’s budget sequestration in January, but Biden says the hotline needs $4.5 million to function.

Established in 1994 as a part of the Violence Against Women Act, the hotline is the largest resource of its kind for victims of domestic violence and dating abuse.

Biden, who has visited the hotline’s headquarters three times, said the organization is crucial in helping millions of victims seek help in situations of abuse.

“There is nothing I’ve been involved with in my entire career that I’m more proud of, that I think is worth sustaining, that I think is more consequential, than the work you all have been doing,” Biden said.

According to Biden, violence against women generally has decreased in the last decade, but violence against young women specifically is on the rise. More resources are needed to expand the program and enable hotline advocates to answer more calls, he said.

“What amazes me is why we should have any problem fully funding this operation,” Biden said. “This is an absolute success — no one can argue with what has been done.”

Biden said the hotline needs at least $4.5 million dollars to function. The hotline was originally set to receive $3.2 million in federal funds annually, but because of the federal government’s budget sequestration in January, funding has been cut to $2.9 million this year, according to Biden.

“We drop somewhere around 50,000 calls,” Biden said. “We need more people, we need more resources to be able to service the demonstrable need that is there.”

Members of the UT student organization Voices Against Violence (VAV) praised the vice president for his commitment to addressing domestic violence and women’s issues.

“In the past, women’s issues haven’t always been government’s top priority,” psychology sophomore Lauren La Riva, a VAV member, said. “Biden shows that this issue is obviously important to him and the current administration.”

The Violence Against Women Act provided $500,000 in grant money to create VAV in 2000, according to Erin Burrows, who serves as health education coordinator for the organization.

“The federal funding received that puts things like that hotline and the things we do here [at VAV] into action is really valuable,” said Sydney Wilkins, a student assistant for the Division of Diversity and Community Engagement. “It’s important for women to know that these resources exist for them.”

The option to text and instantly connect with the hotline appeals directly to high school and college-aged victims, Ray-Jones said.

“If the tests we’ve done are any indication, this is going to make a big difference in the lives of lots of women,” Biden said.

Correction: Because of a reporting error, the article about Vice President Joe Biden in the Oct. 31 issue of the Daily Texan has been corrected. Verizon Wireless made it's donation independently.