From small town hero to college quarterback, Swoopes is already a local legend 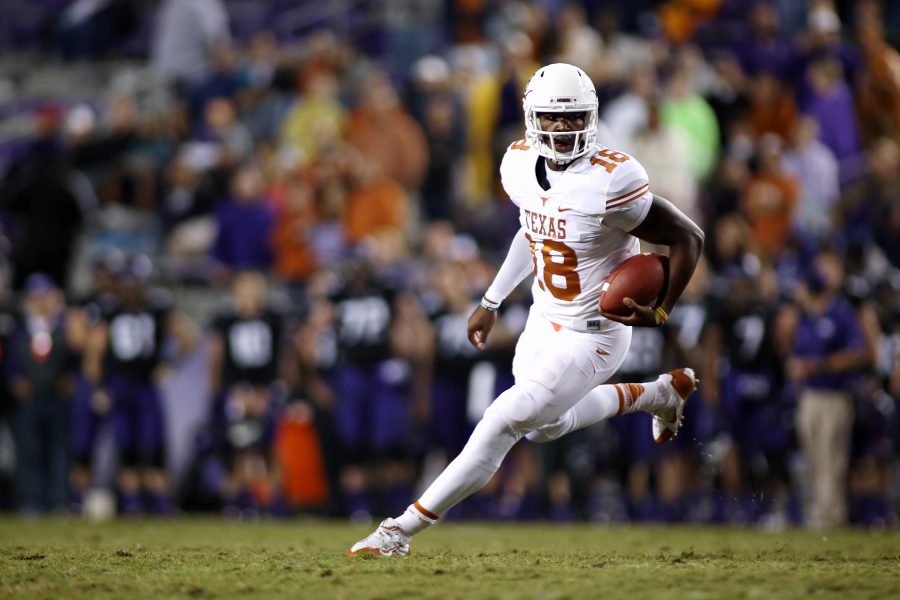 Whitewright, population 1,607, is a 2.1 square mile town. There’s a main street, a few restaurants and its biggest attraction is the Odeum Theater, which sits in the middle of downtown.

“We’re just another small town in Texas,” Whitewright native Mason Thompson said. “Nothing really sets us apart. We have a Quick Chek and some restaurants but nothing big.”

That is until Tyrone Swoopes emerged three years ago as the quarterback at Whitewright High School. His electric blend of talent placed the school back on the map.

The 6-foot-4-inch, 245-pound quarterback is currently a freshman at Texas, and the team’s backup quarterback. Swoopes is one of the most buzzed about players to enter the 40 Acres in a decade. But the 18-year-old, who doesn’t even have a driver’s licence, is used to the attention.

Born Alphonso Tyrone Swoopes Jr., the freshman is quiet and soft-spoken. But according to his high school coach Jack Wylie, Swoopes has a huge sense of humor and an even larger personality.

“The first thing I tell people is that he’s a really good kid,” Wylie said. “Everyone can see what kind of athlete he is on the field, but he’s a really high character man. The type of kid you’d want your daughter to marry.”

Every Sunday you’d see Swoopes at church, and every weekday in study hall encouraging his teammates. His parents divorced in 2001, and Swoopes and his two siblings were raised in a single-parent home by his mother, Elizabeth. She had high standards for the trio; Swoopes wasn’t even allowed to grow facial hair in high school.

“Half the time, Tyrone would be taking out his phone cause he had gotten in trouble with Mom,” Wylie said. “She would take his phone away,”

Swoopes is reserved around most people, except close family and friends, but his demeanor flips when he approaches the field.

“He would be joking around and not very serious before the game, but during the game he would become a whole new person,” Thompson said laughing. “I would always get scared if I dropped a pass. I knew he would yell at me, so I would try and avoid him [because] I’d know he’d be mad.”

It’s easy to notice Swoopes’ on-field talent — he rushed for 560 yards and seven touchdowns in a single game in high school. His effortless burst and rocket-like arm strength pop on film, and he was a highly recruited athlete since his sophomore year in high school. But the small-town star remains grounded.

People question why he played at Whitewright — a 2A school, only a small step above 7-on-7 football. But his mom graduated from Whitewright High School as valedictorian in 1990, and she wanted to raise her children there, grounding them in small-town values.

Swoopes committed to Texas in February 2012, and his mother played a big role in sending him to Austin.

“I know he didn’t want to go too far,” Thompson said. “All the other schools like Oregon and stuff like that were out of the question cause he can’t come back when he wants to. And now his family can go to all of his games. He’s very family-oriented.”

Swoopes also had a connection to Texas. His dad, who played quarterback at Dallas Carter High School, was coached by Bruce Chambers, now the recruiting coordinator and tight ends coach for the Longhorns.

Some compare Swoopes to Vince Young because of his versatility and long-legged strides, but those close to Swoopes dismiss the Young comparison. They believe he’ll surpass the Longhorn legend.

“I believe he can be better than Vince Young,” Thompson said. “That’s just my expectations for him. He’s very dedicated at what he does, so if he puts his mind to it, he will be.”

Swoopes has moved on, but his hometown connection remains strong. Odeum Theater is no longer the biggest attraction in town.

“Every small town idolizes their great players,” Wylie said. “I’ve been coaching for 26 years, and I’ve had a several kids go on to play professionally, but he’s one of the best of them. He’s truly a once in a lifetime kid.”