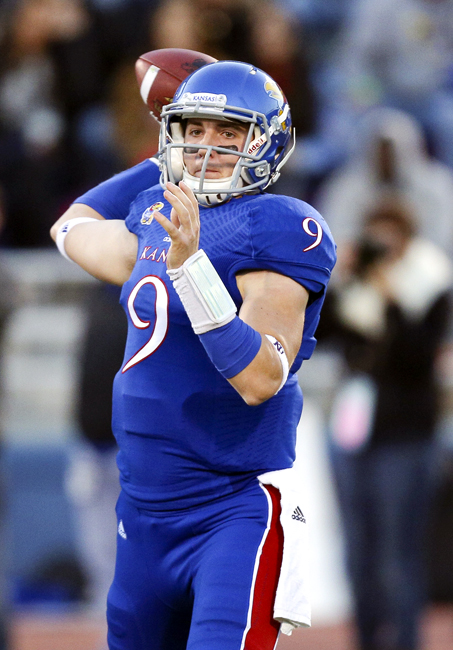 For most members of Kansas’ young squad, this weekend will mark their first taste of action inside Darrell K Royal Texas Memorial Stadium.

But not junior quarterback Jake Heaps.

Back in 2011, his highly anticipated sophomore campaign, Heaps nearly led BYU to an upset of the then-No. 24 Longhorns.

Heaps struggled. But so did David Ash and Case McCoy and — who could forget? — Garrett Gilbert in his final game in a Longhorn uniform.

It took a late second-half rally for Texas to avoid the upset against an upstart BYU team and young quarterback. At the time, everything was going right for Heaps, a quarterback prodigy at the school his mom was a cheerleader for and his grandfather a player.

But the good times didn’t last long. By season’s end, he was leaving the peaks of Utah for the plains of Kansas.

“I think he was a broken individual,” says Taylor Barton, a long-time friend and quarterback coach to the Kansas City Star. “I think everything he went through on and off the field out there, I think really, he was beat down, and he was almost a defeated person.”

Coming out of Skyline high school in Washington, Heaps was the No. 1 quarterback in the nation, according to Rivals.com, and led his team to three consecutive state championships. He even graduated early to compete for the starting quarterback job during spring practice.

When starter Riley Nelson was injured against Florida State, Heaps took over. He struggled at first, winning just one of his first four starts, but began to find his stride.

In the final six games of his freshman year, he won five and was named MVP of the New Mexico Bowl. He threw 14 touchdown passes and three interceptions while posting a quarterback rating of at least 100 in all six games, setting nearly every BYU freshman quarterback record.

The 2011 campaign, however, was rough. It the downhill spiral started with a loss to Texas. Four interceptions and just one touchdown later, he found himself back on the sideline watching Nelson win eight of nine contests.

“It was excruciating,” Heaps told the Star. “I’m a big-time competitor, and that was the first time I’ve sat out since … ever.”

Instead of fighting back for the quarterback role, Heaps took the easy way out.

“If Jake Heaps isn’t embarrassed about transferring from BYU to a school to be named later,” one Utah columnist wrote. “Then he ought to be.”

Heaps decided to transfer to Kansas and play for Charlie Weis, sitting out the year required by players transferring from one FBS school to another. The Jayhawks went 1-11 last season, sparking a brutally assessment of the team by Weis during Big 12 Media Days this summer.

“Everyone wants to play,” Weis said. “There’s no one that wants to not play. I said, ‘Have you looked at that pile of crap out there? Have you taken a look at that?’ So if you don’t think you can play here, where do you think you can play? It’s a pretty simple approach. And that’s not a sales pitch. That’s practical.”

That’s exactly the type of situation Heaps was
looking for.

He was the starter from the get-go on a team that didn’t have a wide receiver catch a touchdown pass. But the numbers haven’t followed the playing time.

He has put up more than 200 yards just once this season. He has thrown one — and exactly one — touchdown each game. Considering that Heaps is playing for a team that is playing from behind nearly the whole game, that’s not very impressive.

And after three straight losses and subpar performances, he was benched for freshman Montell Cozar last week against Baylor.

“They didn’t give us any trouble,” Baylor senior nose tackle Sam Holl said after the win of the Kansas quarterbacks.

Weis, once again, was not pleased.

“It’s not a perfect world playing both quarterbacks,” Weis said after the Baylor loss. “I think that it’s going to be more and more the same as it was tonight as we go. Rather than worry about settling into one, we have to get them both ready to play.”

And if neither of them turn it around against Texas or the rest of the season, UCLA transfer T.J Millweard will be the Jayhawks’ next quarterback of the future.

Heaps will try to do his part to make sure that doesn’t happen — again.