Kansas offensive unproductive but has weapons in Sims, Mundine 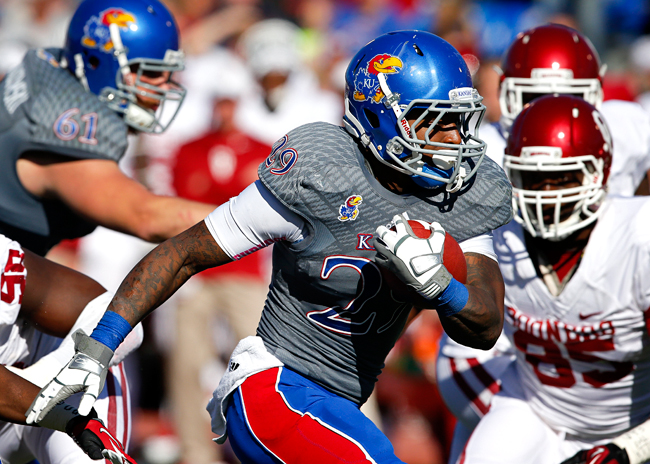 Although the Jayhawks have had trouble finding the end zone this season, they usually find success when the run game is clicking. For his troubles, James Sims is Kansas’ leading rusher, compiling 589 yards on 129 carries with four touchdowns. The senior also has 13 catches for 81 yards this season so he can stretch the field by catching the ball if necessary. Sims is a veteran on this Jayhawks offense and will be ready to play Texas despite the momentum that Texas is currently riding. Sims is powerful enough to break tackles if the Longhorns revert back to their old ways of not wrapping up the ballcarrier, and he has the speed to make defenders miss in the open field. With more than half of the team’s rushing touchdowns this season, Sims is the man in the backfield that Texas will need to prepare for.

Johnson is the leading tackler with 53 stops this season on a team that gives up a lot of points. He is also tied for the team lead in interceptions with two, so he can play well in coverage when he wants to. The Kansas defense ranks No. 92 in the nation in total defense which doesn’t bode well against a hot Texas team, but Johnson can make a difference in the game by making plays he is capable of making.

Mundine is not the Jayhawks’ leading receiver but his four touchdown catches leads the team and he is one of the biggest threats in this game. Mundine is an average athlete with average size at his position but he makes plays on the balls that are thrown to him. He has only reeled in 13 passes this season but has made the most of them. If Kansas can use its running game to get red zone opportunities, Mundine will likely be the go-to guy. The Longhorns front seven has the ability to take Mundine in coverage, but should be weary of the fact that he will probably get many looks in this game for a struggling Kansas team.