Longhorns no longer the team they were in early September 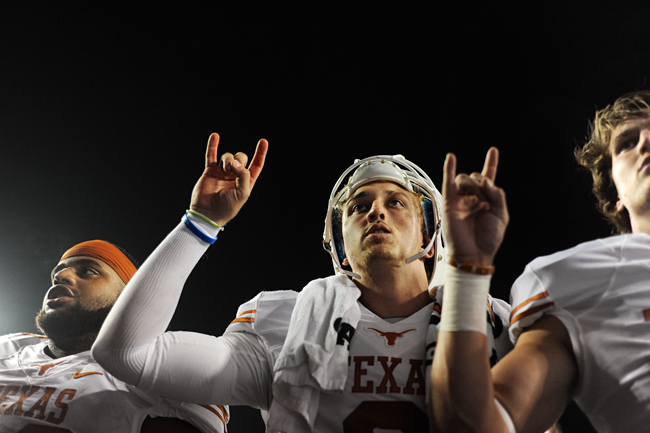 Almost two months ago, the Texas football program was flipped upside down. The Longhorns lost two straight in embarrassing fashion, Manny Diaz was relieved of his duties as defensive coordinator, and shirts were made lobbying for the firing of Mack Brown and hiring of Nick Saban.

Now, Texas has won four straight, including an upset of Oklahoma, and Brown’s job looks a little more secure. A change was made for that to happen.

“When you have two tough games like we had early in the season, you go one way or the other,” Brown said. “There becomes finger-pointing, your team splits, your staff splits.  They all call around for jobs, or you can go back to work.  We had that discussion with our staff and players.  We decided we’re Texas, we’re going back to work. That’s who we are, that’s what we do.”

That change came against Kansas State 41 days ago, the last time Texas played at home. The Longhorns decided to turn things back right side up. They beat the Wildcats for the first time since 2003 and won their first conference game of the season that Saturday.

“I wouldn’t say it’s a culture change I would say it’s a change in us,” junior defensive end Cedric Reed said. “We knew that we left a lot of stuff on the table those games. We changed ourselves as a defense and as a team to get this thing turned around.”

Texas remembers the feeling after those two losses. It was a feeling of disappointment and most of all frustration. The Longhorns believed, and have since then shown, that was not the team they were.

“Those two games there was a lot of stuff that was on us not doing our job,” junior running back Malcolm Brown said. “Just going back and looking at those two losses was just frustrating cause we know what we can do and who we can be. It was just a complete change of focus and of our mindset. We knew that we didn’t want to go back to that team against Ole Miss and BYU.”

Focus has been a key to that new change for the Longhorns. The team is going into each game with a complete package of effort and concentration that they hope to get brought out every play.

Since their game against Kansas State, one of the biggest changes — not by choice — has been in their quarterback. The Longhorns lost David Ash to a head injury, putting senior Case McCoy in his place.

“I think the biggest thing that’s changed with the team is confidence,” Mack Brown said. “We had to change our identity because we had David Ash all the things he was doing for the identity.  Your quarterback has to be a huge part of who you
are offensively.”

Nevertheless, Texas has changed, whether in its personnel or in their culture. To some Longhorns, however, it doesn’t matter how they changed, it’s just that they’ve changed. They are no longer that team from the first few weeks.

“Sometimes you have to fail to succeed,” junior Quandre Diggs said. “Those two games hurt us in a bad way and we never want to have that failing again. It could be a scheme change or culture change. We just want to win games. We don’t really care what it is that changed. We just want to win.”