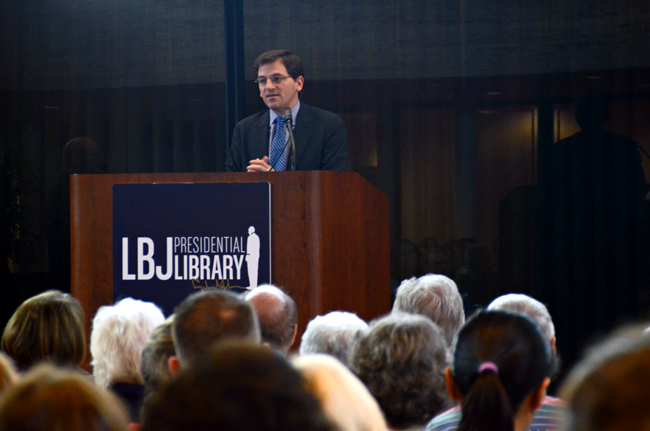 Baker promoted his recently released book, “Days of Fire,” which details the Bush-Cheney relationship during their eight years in the White House, at the inaugural event of the William P. Clements Jr. Center for History, Strategy and Statecraft on Thursday. Following the talk, Baker signed books for event attendees.

“Journalists who cover events in the moment get 10 percent of it. We get the essential truth, but we miss so much more,” Baker said. “Only in the venture of reexamining, re-reporting, you start to fill in the picture.”

Baker said Cheney only became an influential vice president because Bush confided in him and allowed him to be.

Though Bush and Cheney saw eye-to-eye during the first term, Baker said, they began drifting apart after years into the Iraqi war.

“Vice President Cheney was focused single-mindedly on the danger the country was in after 9/11,” Baker said. “That became his North Star. [Bush] begins to try to build a sustainable policy that will last beyond his presidency. Cheney thought these were mistakes, that he was compromising too much.”

Tawheeda Wahabzada, first year global policy studies graduate student, said she remembers little about the Bush presidency, but she would like to revisit the time period to gain insight into the politics and dynamics of Bush and Cheney.

“I’ve always perceived in the past — maybe because of the media — Cheney was the driving force and controlling everything,” Wahabzada said. “But hearing about the vast differences between Cheney and Bush and their disagreements on so many issues surprised me.”

Jacqueline Chandler, program manager of the Clements Center, said Baker’s close ties with the White House make him an important source for information about past and current presidencies.

“Anything you can learn about a past presidency is a hot topic,” Chandler said.