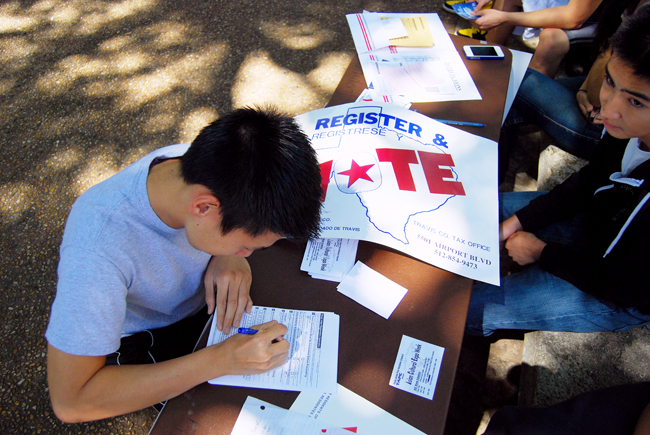 A student registers to vote at a booth set up by the Asian-American Panhellenic Council at the West Mall April 17. Their aim was to encourage more political participation by not only Asian-Americans but also the student population in general.

On Tuesday, the polls will open across Texas for a ballot election containing propositions that confront issues ranging from water planning to reverse mortgages. Students can vote on campus at the Flawn Academic Center and are required to bring a government-issued ID. Below are the endorsements of the Daily Texan editorial board for the Nov. 5 election.

The constitutional amendment authorizing the legislature to provide for an exemption on from ad valorem tax on of all or part of the market value of the residence homestead of the surviving spouse of a member of the armed services of the United States who is killed in action.

Vote yes. It’s always problematic to add another tax exemption to the long list of exemptions already available. Nevertheless, we support Proposition 1 because we believe the sacrifices made by military families make them deserving of the relief provided by this exemption.

Vote yes. Proposition 2, if approved, will eliminate an outdated, ineffective board that was originally created to encourage medical students to set up practice in rural areas. Although the state’s rural population needs better access to medical care, the board hasn’t issued a single new loan since 1989 and has been effectively supplanted by other, more efficient measures. Voting yes will help streamline Texas government by doing away with an obsolete, toothless relic of another era.

The constitutional amendment to authorize a political subdivision of this state to extend the number of days that aircraft parts that are exempt from ad valorem taxation due to their location in this state for a temporary period may be located in this state for purposes of qualifying for the tax exemption.

Vote yes. While Texas relies heavily on property tax revenues to fund its operations, we encourage Longhorns to vote yes on this measure because the current time limit of 175 days unfairly burdens aircraft parts suppliers, who, because of industry turnover rates, often have to hold parts for longer periods of time. Extending the current limit to two years would allow businesses like San Marcos-based CFAN, which makes parts for Boeing jets, to remain competitive with out-of-state parts suppliers.

Vote yes. Again, it is always problematic to add another tax exemption to the long list of those available in the state. But we agree with the reasoning of state Sen. Leticia Van de Putte, San Antonio, who stated (in a rebuttal to the suggestion of the Austin Chronicle to vote “no” on this proposition) that it sometimes happens that veterans are gifted homes by charitable organizations and then lose these homes when they can not pay the required property taxes. Sen Van de Putte has reasoned that this amendment would prevent such tragedies from occurring, and we agree with her.

Vote yes. Proposition 5 was placed on the ballot after Senate Joint Resolution 18, authored by Sen. John Carona, R-Dallas and Rep. Mike Villarreal, D-San Antonio, passed the Texas Senate unanimously and received only one “no” vote in the Texas House. It provides Texas seniors with an alternate method of financing their retirement and has been endorsed by AARP. Texas is currently the only state that does not provide this type of mortgage, and allowing the state to do so would be a relief to many Texas seniors who lack sufficient funds for retirement.

Vote yes. This is the most important issue on the ballot this year. The proposed constitutional amendment would create a permanent fund to finance water management projects around the state, and would start it off with an investment of more than $2 billion from the state’s rainy day fund. Don’t let the recent floods fool you. Texas is suffering from a crippling drought, and experts predict a disastrous combination of skyrocketing population and dwindling fresh water resources over the next 50 years. If our state doesn’t spend tens of billions of dollars on maximizing the efficiency of its water use, it will be impossible to sustain a stable population here — let alone a successful economy. From rice farmers on the Colorado to ranchers on the I-35 corridor to the entire city of Austin, the number of people who depend on this measure passing is too great to ignore.

The constitutional amendment authorizing a home-rule municipality to provide in its charter the procedure to ﬁll a vacancy on its governing body for which the unexpired term is 12 months or less.

Vote yes. Electing officials for terms of less than 12 months wastes taxpayer money on unnecessary elections and puts in place public officials who lack the time necessary to perform their duty to the voters.

The constitutional amendment repealing Section 7, Article IX, Texas Constitution, which relates to the creation of a hospital district in Hidalgo County.

Vote yes. The enabling legislation for this medical district puts a cap of 10 cents per $100 valuation of taxable property on the district’s property tax rate. Other hospital districts around the state are allowed to levy a much higher tax rate. This, along with the county’s relatively small tax base, has long hampered the creation of a functional hospital district. Removing this limit will increase the chances of better medical care for Hidalgo County residents.

The constitutional amendment relating to expanding the types of sanctions that may be assessed against a judge or justice following a formal proceeding instituted by the State Commission on Judicial Conduct.

Vote yes. As much as we’d like to think of our judges and justices as untouchable paragons of virtue, Texas judicial practice has shown that they are susceptible to the same corrupting influences as the rest of us. Just two-and-a-half months ago, Abel Corral Limas, a former Texas state judge, was ordered by a U.S. district judge to pay restitution for selling favorable rulings. And this phenomenon is hardly a recent one. State District Judge O. P. Carrillo, who has been in the news again recently in relation to the investigation and possible impeachment of UT System Regent Wallace Hall, was impeached and removed from the bench in 1976 for “schem[ing] to take Duval County taxpayers’ money through phony equipment rentals,” as the Amarillo Globe-News put it at the time. These breaches of the public’s trust must be taken seriously. While the State Commission on Judicial Conduct is currently authorized to censure or recommend the removal of a judge or justice, this amendment would add to that list the ability to “issue an order of public admonition, warning, reprimand, or requirement that the judge or justice obtain additional training or education in addition to the currently authorized punitive sanctions,” according to the Texas Legislative Council.

Vote yes. Austin’s proposed $65 million bonds would do a lot of good for the city’s low-income citizens, many of whom face great difficulty in meeting the state’s highest housing prices. There’s a lot to like about the Affordable Housing Bonds. Despite critics’ claims, they would not raise the city’s tax rate, and similar bonds in the past more than recuperated all the money spent. And helping the poor afford housing would encourage a more stable, prosperous community by allowing them to stay and contribute to the city’s economy without as much fear of losing their homes. We believe that no one should be excluded from our city because of its exorbitant housing costs. The rest of us can do something to help those in need of affordable housing out by voting yes, and that’s what being a good neighbor is all about.