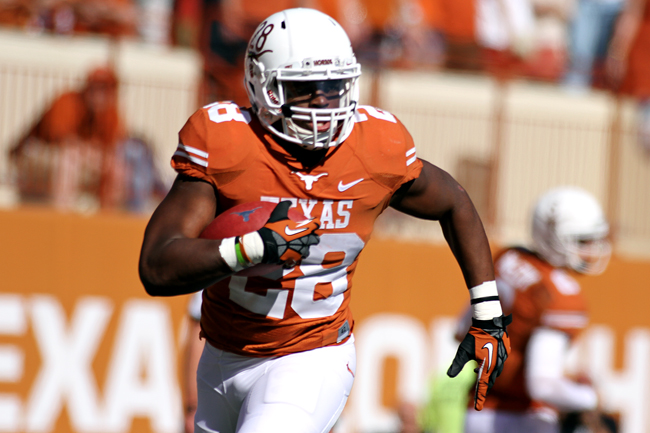 For the first time in his three years at Texas, junior running back Malcolm Brown is on pace to play an entire season for the Longhorns.

Brown battled foot and ankle injuries throughout his first two years, and missed nine games during that stretch. His sophomore season was especially difficult, as a nagging ankle ailment cost him six games and held him to 324 rushing yards on just 61 carries.

While the running back has yet to miss a game this season, another ankle injury at the start of this season limited him to 63 rushing yards in his first five games. Despite this, Brown never doubted his ability to persevere, and with each reoccurring injury, he still managed to keep his mind focused on returning.

“That’s just how I was raised,” Brown said. “I talked to my parents a lot, and I talked to my dad a lot. He just told me to keep faith and keep praying, and eventually good things would happen for me.”

Good things have certainly happened for Brown in the last three weeks. The junior emerged as the Longhorns’ primary goal-line option, scoring six touchdowns while rushing for 290 yards on 60 carries. This all came after he received just 23 carries in his first five contests.

Brown’s turnaround this season started against Oklahoma, when he rushed for a season-high 120 yards on 23 carries. He followed this up with a two-touchdown effort against TCU, and then exploded for a career-high four rushing touchdowns against Kansas on Saturday, leading the Longhorns with 119 yards on the ground.

Brown’s physicality allowed him to take over as Texas’ short yardage back, a position previously held by junior running back Joe Bergeron. While this role demands Brown to seek contact and run between the tackles, he remains unconcerned with the possibility of getting injured again.

“As I’m playing in the game, it really doesn’t go through my mind at all,” Brown said. “I’m healthy, so I’m going to do what I can for the team. That’s a role I’ve taken on being the short yardage guy, so I need to stick my head in there.”

Head coach Mack Brown has noticed a renewed confidence in the running back, and he believes Malcolm Brown possesses the necessary size and skill set to succeed near the goal line. After all of the injuries, Mack Brown is pleased to see the junior back on the field and embracing his new role.

“He’s one of the nicest young people and the ultimate team guy,” Mack Brown said. “He’s always giving so much credit to everybody else. He’s never griped once about being hurt. He’s never griped at all about not getting the ball as much. I’m glad for us, but I’m also glad for him that all this is happening well for him now.”

Malcolm Brown has already set a new career-high with seven rushing touchdowns this season, and he maintains an outside chance of surpassing the career-best 742 rushing yards he racked up as a freshman in 2011. For now, though, Brown is just happy to be back on the field and healthy once again.