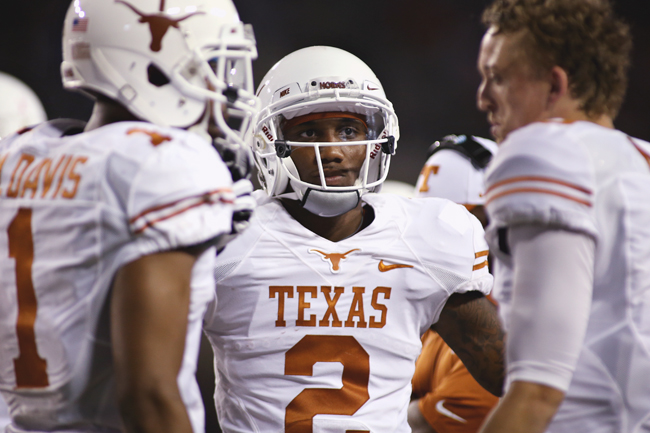 Three years ago, defensive back Mykkele Thompson came to Texas with a set of skills opposite of those he uses now.

Thompson was a quarterback in high school, regarded as one of the best athletes in the state of Texas. He recorded 5,322 all-purpose yards and a total of 62 touchdowns during his final two seasons. But when he arrived at the 40 Acres, he started his career on the other side of the ball, which proved to be quite the challenge.

“It was a struggle for me,” Thompson said. “It was a totally different side of the ball from what I played.”

For Thompson, the hardest part about becoming a defensive player was hitting. The junior only played defense in one game before becoming a Longhorn and had no real experience tackling. Secondary coach Duane Akina said Thompson’s struggles were normal, though. Former Longhorn and current New York Giant Aaron Ross went through the same transition.

“You are going to go through some growing pains when you play in the secondary, especially with one that is as aggressive as ours,” Akina said. “We put some guys on islands back there. We can go through it with Aaron Ross and some of those great ones who had some struggles early in their careers and did fine by the time they left here. I see Mykkele much in that same stride.”

Thompson is moving in the right direction. This season he is a force in Texas’ defensive backfield and attributes much of that success to Akina.

“Coach Akina is really encouraging, and he’s always pushing you,” Thompson said. “He just told me that I had the potential, so I went out and worked on it.”

There are some things the safety can improve on, though. The 6-foot-2-inch, 186-pound athlete is used to the pressure he faces, but still feels the stress when it becomes his job to stop the ball carrier.

“I’m the last defensive help back there,” Thompson said. “It’s a really scary moment when a guy is running with a full head of steam at you and you have to take him down. It’s very nerve-racking.”

Nevertheless, Thompson has helped turn around a defense that started the season 1-2. After that start, which cost defensive coordinator Manny Diaz his job, many believed Texas would end up with another losing season. But Thompson and his defensive squad rose to the occasion.

“I feel like everybody is just doing their assignment,” junior defensive back Quandre Diggs said. “Playing assignment football, everybody is in the right spot, the right place they’re supposed to be. We don’t have guys trying to do too much and trying to execute other people’s assignments. You can definitely see a team that’s maturing at the right time and continuing to grow as a football team.”