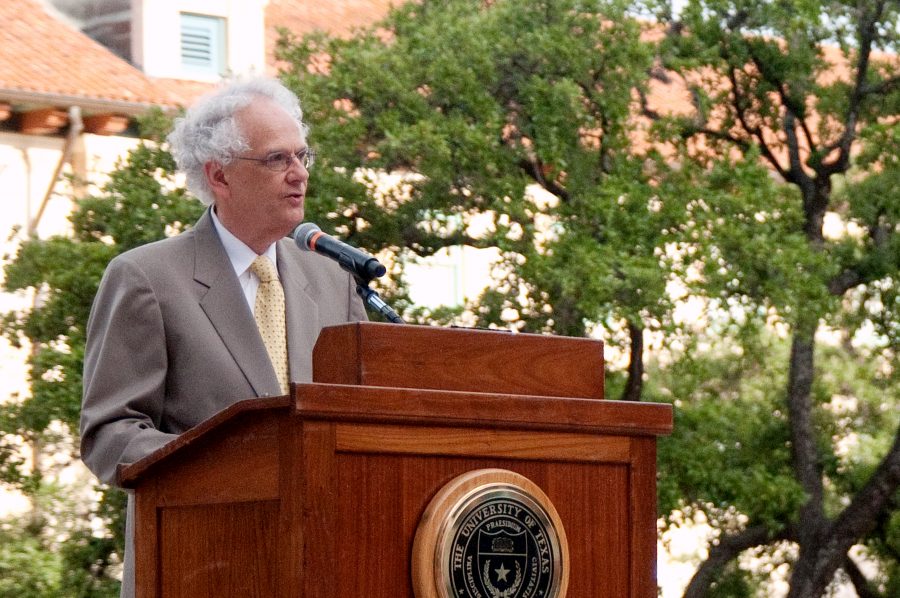 Over a dinner at a loud, high-end seafood restaurant in chilly February, Roderick Hart, dean of the College of Communication, found himself in a conversation he didn’t expect to have that night.

Hart was speaking to Moody Foundation trustee Ross Moody about the college’s goals. Naming the college after a donor was the “big enchilada,” Hart said, which prompted Moody to ask how much it would cost to name UT’s College of Communication after his foundation. Leaning back in his chair with a glass of scotch, Hart disclosed the figure the UT System Board of Regents had set for all colleges.

As the University repeatedly recounts to alumni and donors that decreased state support means monetary gifts are needed more than ever before, fundraising still remains a discrete process. Stories behind donations, such as the Moody Foundation’s gift, offer rare insight into the fundraising process, the steps deans take in securing donations and their recent increased involvement in development.

The Moody Foundation’s $50 million donation to the University will be celebrated Thursday in a formal ceremony — more than two weeks after Hart told an upper-division communication class about the donation, forcing UT to announce it sooner than it hoped. The donation will help fund several endowments and the construction of a sky bridge connecting the Belo Center for New Media and the Jesse H. Jones Communications Building A.

Even though the University has a central office dedicated to development and fundraising, individual University deans often play a crucial role in fundraising and raising money for their respective colleges — especially since fundraising has become a more essential element of the University’s budget. State support made up almost half of UT’s budget in 1984, while it makes up only 13 percent of UT’s $2.48 billion budget today. Meanwhile, gifts and endowments have gone up from 3 percent of UT’s budget in 1984 to 10 percent.

“In the last couple of decades, I think fundraising at the public university domain has been elevated in importance quite significantly,” said former provost Steven Leslie, who oversaw the deans for more than six years before he stepped down from his position this fall.

Fundraising by deans occurs as they court donors, sometimes over an evening dinner and sometimes over a period of many months or even years. Hart called the dinner with the Moody Foundation a “stewardship” dinner — a thank-you for a prior $2 million gift and an effort to seek more support from the foundation.

Hart secured the Moody Foundation gift over a period of several months. After the February dinner, Hart had to seek approval from President William Powers Jr. to continue having official conversations with the foundation. The UT System Board of Regents also had to approve the agreement to attach the Moody name to the college, as the board has jurisdiction over the naming opportunities of buildings and colleges.

After Hart received approval to proceed, the Moody Foundation requested a proposal from him in May. He spent several weeks in the summer crafting a 50-page proposal that included a breakdown of what the college would do with the $50 million, letters of recommendation for the college from prominent donors and a photo of a sky bridge across Dean Keeton Street with the name Moody emblazoned across it. The Moody Foundation approved the request earlier this year.

Hart estimates he has spent a majority of his time in the past 10 years as dean on fundraising, because the college needed additional funds and raising money became the part of the job he enjoyed he most.

UT handles fundraising from multiple angles. While a call center works toward collecting small donations from the average alumni, a central development office works with the individual colleges to secure larger grants and donations throughout campus. Colleges have their own development teams that work with the dean. Many colleges have an associate dean who helps deans fundraise, especially when they want to expand a college’s programs or facilities.

Former UT presidents William Cunningham and Larry Faulkner highlighted the importance of fundraising responsibilities and collaboration between the University’s president and deans.

“Clearly, in my opinion, the deans and the presidents are the ones who raise the money,” Cunningham said. “If you didn’t enjoy fundraising, you wouldn’t enjoy the job.”

While Hart said he is unaware if he’s ever been evaluated based on his fundraising capabilities, fundraising is an essential indication in evaluating and hiring deans, Faulkner said.

Postings announcing openings for deans commonly require candidates to have experience in fundraising and development. In a document outlining the expectations of the inaugural dean of the Dell Medical School, UT lists fundraising and developing relationships with the community and external stakeholders as a the dean’s responsibility.

The trend extends beyond UT. A job listing for an engineering dean at UT-San Antonio lists fundraising for endowments and other college activities as part of the dean’s responsibilities. Outside of Texas, job listings for colleges in California and Virginia, among others, indicate deans will be expected to implement a “strong fundraising strategy” and “play a leadership role in the college’s fundraising and external relationship-building.”

Cunningham, who was the dean of the McCombs School of Business before his promotion to president in 1985, said he believes it was his successful fundraising track record that led to his promotion.

“I was only dean for roughly two years, and we raised a million dollars a month for 24 months in a row,” Cunningham said. “Good deans do that. Good deans are out hitting the pavement, talking about the college and why they need external support. It’s just what good deans do.”

After relying on funding allocated from the System for many years, Cunningham said it was during his tenure as president that the University increased its use of using naming opportunities to entice donors.

Despite the importance UT places on development and obtaining large, philanthrophic gifts, the fundraising responsibilities of deans is still dependant on a college’s reputation and academic success.

Hart compares his role to a lobbyist and said asking donors to invest in academic efforts is similar to lobbyists seeking support for policies.

“I don’t have any policies to advance, but I do have a college to advance,” Hart said. “I would go and talk to the devil himself, if necessary, to explain what a wonderful place we are to invest [in].”