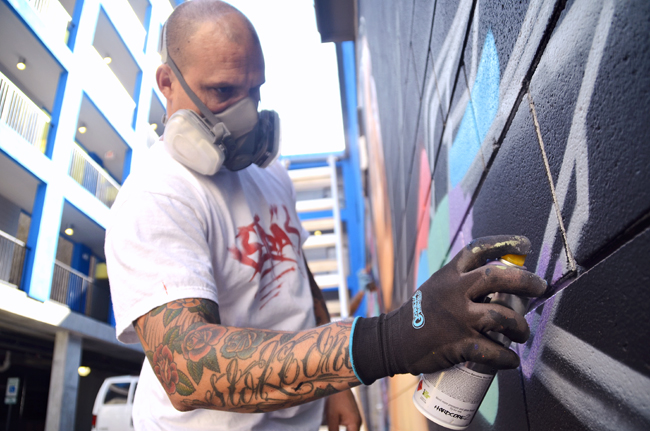 Graffiti artist Nathan Nordstrom works on his latest public art installment in West Campus. One of the most well-known names in Austin public art, Nordstrom will be live painting at Fun Fun Fun Fest. " />

Graffiti artist Nathan Nordstrom works on his latest public art installment in West Campus. One of the most well-known names in Austin public art, Nordstrom will be live painting at Fun Fun Fun Fest.

At Fun Fun Fun Fest, Austin graffiti artist Nathan Nordstrom makes a performance out of something usually done in secret.

Graffiti is based on tags and spray paint wording, but street art has a broader definition, incorporating everything from spray paint and stencils to plastered posters.

“Graffiti has a long history,” Nordstrom said. “It has been built up by many pioneers on decades of experiences, where as street art is relatively new.”

Nordstrom was one of the original artists asked by Fun Fun Fun Fest to spray paint live at the festival five years ago. This year the live painting will be on a larger scale.

“Last year we built a box and started painting the box … and it was a big hit,” Nordstrom said. “We are excited to paint again this year. “This year we hope to out-do ourselves. We want to build two boxes … and it has become an added attraction to the festival.”

Three of the biggest names in Austin’s public art scene today are Eleanor Herasimchuk, better known as Niz, Federico Archuleta and Nordstrom. The artists work in similar mediums, but their artwork is different.

Herasimchuk said her aerosol, photo-realistic stencil art is closer to street art than graffiti. The paintings often feature large portraits with graphic, contrasting colors. Her transition into the world of public art stemmed from her previous job as a social worker.

“I used to work in HIV prevention,” Herasimchuk said. “I worked with kids one-on-one, but my focus was in education through art and in murals. So that was my first little introduction into it, and since then, the more involved I became in hip-hop culture and skateboarding culture, I kind of became pushed in that direction.”

Archuleta more closely identifies with graffiti, but his work also contains elements of street art. Archuleta said his start in the graffiti world was an accident, when he decided to decorate the exterior of Tower Records, a store on the Drag that closed in 2003 that he used to work.

Once I did that for the store, the feedback I got back from the public made me realize that, ‘Hey I could be pretty good at this,’”
Archuleta said.

As a veteran to the Austin graffiti scene, Nordstrom has been painting around town for the last 24 years. He was mentored by graffiti artist Skam and has been tagging ever since.

“I would see these pieces around town when I was skateboarding in ditches and tunnels, and I was like, man, I want to learn,” Nordstrom said. “So when I met Skam, it opened a door. He gave me an outline to practice, and I’d help him out with projects … I started out on the bottom, and I’ve been doing it ever since.”

Public art is constantly being replaced by new pieces. It is this evolving nature that pushes Nordstorm to grow as an artist.

“That’s the beauty of graffiti art,” Nordstrom said. “You’re only as good as your last graffiti piece. I’m always trying to do a better job on the next piece. I mean I do have some pieces that I’m proud of, but I haven’t yet created ‘the one.’”

Although Herasimchuk has never painted at Fun Fun Fun Fest, she has done many live art events and appreciates what Nordstrom and the others bring to their audience.

“Graffiti is already in the public all the time; it’s everywhere, especially if you look for it,” Herasimchuk said. “But what I think is interesting about having live graffiti painting events is that people get to see the technique and skill that goes into it. They get to see it from blank canvas to finished product.”