Tom Hicks: Hall told sports agent Powers would be gone within the year 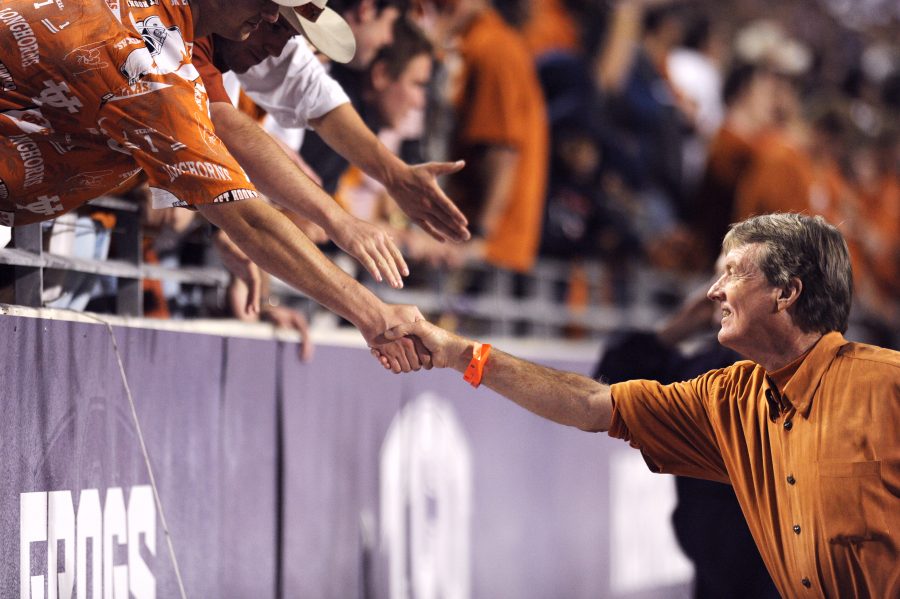 UT System Regent Wallace Hall said President William Powers Jr. “would not be here at the end of the year” in a private conference with a sports agent earlier this year, according to former Regent Tom Hicks.

Hall and fellow regent Steven Hicks, who is Tom Hicks’ brother, came under fire in September for discussing the possibility of replacing head football coach Mack Brown with University of Alabama coach Nick Saban without the president’s knowledge.

According to an email obtained by The Texas Tribune, Hall and Tom and Steven Hicks discussed replacing Brown with Saban on a conference call with Jimmy Sexton, Saban’s agent, on Jan. 5. In the email, Tom Hicks said the regents told Sexton “Mack had leadership’s support to stay,” but that Tom Hicks would speak to Brown about retirement.

According to the email, Hall reassured Sexton that Powers’ influence might not be relevant for much longer.

“[Hall] told Sexton that UT leadership was most likely going to change during the year, and maybe the timing would be better a year or two later,” Tom Hicks wrote. “Specifically, he made the statement the Bill Powers wouldn’t be here at the end of the year.”

Though Tom Hicks alleged that multiple regents, including former chairman Gene Powell, were aware of the January discussions with Saban’s agent, Powers was not aware of the situation until September.

Hall, who is currently under investigation for allegedly abusing his power as a regent, has had a tense relationship with Powers for several years. Hall has been accused of conducting a “witch hunt” against Powers, largely as a result of the broad open records requests he filed this year, totalling more than 800,000 pages of information. Over the course of the investigation, witnesses have alleged that he made major impositions on the office of Kevin Hegarty, executive vice president and chief financial officer.

Open records coordinator Carol Longoria said she and her colleagues would regularly work until 10:30 or 11 p.m. to fill Hall’s requests.

If he is impeached, Hall would be the first ever non-elected official to be removed from office in Texas.

The House Select Committee on Transparency in State Agency Operations will hear additional testimonies at its next hearing on Nov. 13.