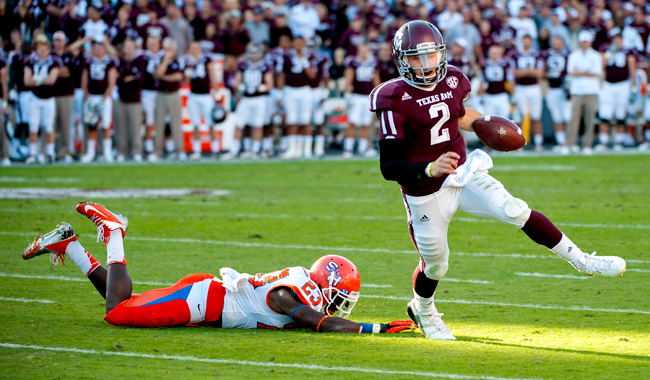 Mariota’s awful performance allowed Winston to claim the title as Heisman frontrunner. Although Winston wasn’t spectacular in his team’s rout of Miami, he did play pretty well. For now, though Winston has his Seminoles No. 2 in the BCS standings and with a great chance to finish the regular season undefeated and claim the ACC title. If the Seminoles continue winning and Winston continues to impress, he very well could become the second freshman to ever win the prestigious trophy.

Petty and the Bears started the game slowly on offense but exploded after falling behind, 5-3. Petty proceeded to run by the Sooners’ front seven for his two rushing scores before tossing a touchdown to make it, 24-5, at halftime. He threw two more touchdown strikes and actually finished with impressive numbers considering he started the game 2-for-7. Petty proved that he is absolutely a Heisman contender and should remain highly in contention for the duration of the season.

Manziel continues to play at an elite level and is on pace to surpass the passing numbers from his record-breaking freshman season. What hurts Manziel’s chances the most is that he threw two interceptions in each of the Aggies’ two losses. Also, his rushing totals are drastically down from 2012, though when needed to, he usually still makes the big play with his feet.  Manziel probably won’t claim his second Heisman, but upcoming games at LSU and Missouri will keep him in the national spotlight and give him an opportunity to dazzle voters.

Mariota struggled mightily against a stingy Stanford defense, and saw his team fall for the first time in 2013. He wasn’t entirely to blame for the loss, seeing that the Ducks couldn’t get Stanford’s offense off the field, but when he was on the field he was mostly ineffective. He also lost a fumble on a critical possession with the ball on the Stanford 24-yard line trailing, 20-0. He played better in the fourth quarter, helping his team nearly rally back, but his struggles earlier in the game doomed his team.

Carey carried the Wildcats to bowl eligibility, even though he was held out of the end zone for the second time this season.  Carey probably would’ve scored, but quarterback B.J. Denker vultured three potential scoring opportunities in the red zone.  Carey continues to dominate on the ground while making his case as the top running back in college football, building off a 1,929-yard, 23-touchdown sophomore campaign. The Wildcats host UCLA this weekend and Carey could make a big splash in the Heisman race if he pounds the Bruins.