“Thor: The Dark World” has weak story between effective moments 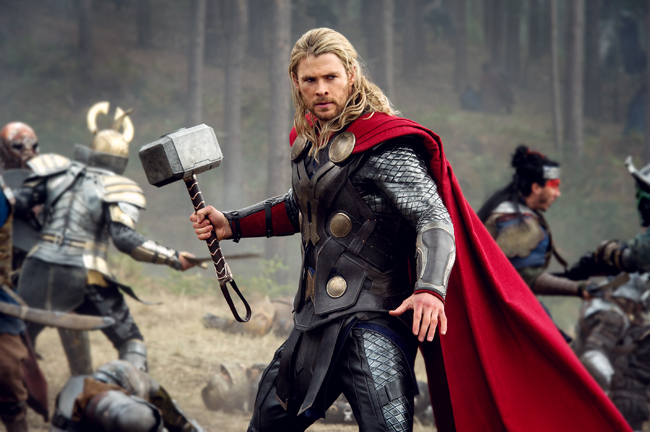 Marvel films are driven by big moments. They are the scenes that sell in the trailers, like every Avenger preparing to save New York from an alien invasion, or a thousand Iron Man suits showing up to defend Tony Stark. What makes these moments so satisfying is the way the film sets them up and the journey that’s taken our heroes to that climactic point.

In “Thor: The Dark World,” director Alan Taylor excels at creating those big moments. Taylor was plucked from a job on HBO’s “Game of Thrones,” and his handle on medieval imagery makes him a great fit for the “Thor” franchise. Usually TV directors are hired merely to get the script to the screen, adding visual style and leaving the storytelling to the writers. This workmanlike spirit makes Taylor both the best and worst possible director for “The Dark World,” which lumbers through its story with dutiful disinterest.

The film opens with a “Lord of the Rings”-esque info-dump, chronicling the defeat of Malekith (Christopher Eccleston), a dark elf with plans to take over the universe using a weapon called the Aether, which is hidden to ensure it can never be used again. Thousands of years later, Jane Foster (Natalie Portman), still heartsick over her brief encounter with Thor (Chris Hemsworth), stumbles onto the Aether and is infected with it, drawing Malekith out of hiding.

Hemsworth’s performance as Thor continues to carry the perfect mixture of charismatic bravado and endearing humility, and his interactions with Loki (Tom Hiddleston) are among the film’s best character moments. Since his villainous turn in “The Avengers,” Loki has emerged as a fan favorite. Hiddleston is perfectly loathsome in the role, but his character is sidelined throughout. Portman, meanwhile, seems oddly content with her non-character here, existing to move the plot along and nothing more. While she’s charming enough, the non-agency of her character is equally frustrating and off-putting.

There are big moments in “The Dark World” that work, particularly the climactic barrage of fantastical imagery and inventive showdowns. Earlier action scenes manage to capture a charming “Star Wars” vibe, blurring the lines between science fiction and fantasy effectively. For all of the action beats that work, the story is a complete bust.

Thor’s struggle against Malekith is a perfunctory distraction between effects-heavy moments, and every element of it is glazed over and uninspired. Malekith is uninteresting as a villain. He is a bad guy because the movie needs a bad guy, and there’s little in the way of motivation or interest for his character.

There are moments, most of them involving Loki, in which “The Dark World” intrigues, but it’s constantly undercutting itself with lackluster storytelling. Even the film’s most compelling and — had it not been spoiled in the trailers — surprising moment exists solely to give said trailers a great hook. The film’s ending is similarly underhanded, spelling out an obvious narrative endpoint in the most unsatisfying way possible.

The blame for “The Dark World” can’t be laid squarely at Taylor’s feet, but at the menagerie of writers who developed the film’s story and screenplay in the most unimaginative way possible. While the film is consistently competent, it surges to life only occasionally, and it’s sad to say this uninspired sequel is the weakest of the Marvel films to hit theaters thus far.