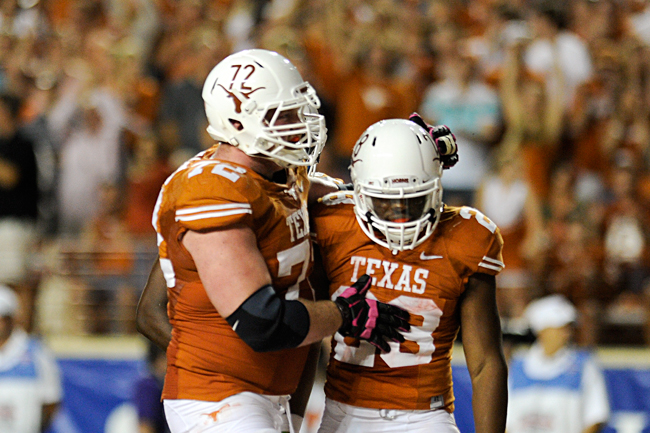 Texas has been struck with a variety of adversities this year, from starting 1-2 to the reassignment of its defensive coordinator Manny Diaz to numerous injuries on both sides of the ball.

No other place have those injuries been more relevant than in the offense, specifically the offensive line, which has been without Josh Cochran and includes a banged-up Mason Walters, who has been playing through a knee injury all year. However, Walters has taken his leadership role to propel against those adversities and help lead his team back from a 1-2 start.

“I think we’ve continually come closer and gelled more and more,” Walters said. “[There’s] a different chemistry than we’ve had in the past.”

Walters has helped make that chemistry happen. The senior offensive guard came into this season as one of the most experienced players in the nation. The fifth-year player started the last 46 games, marking the second-longest streak in the nation among offensive linemen. Walters has also helped the offense gain an average of 446.6 yards per game this season and push a much-improved run game from where it was earlier in the season.

Though, before this turnaround could come, a standard had to be changed.

“I think in their mind there is a standard that allows them to free up and play for whatever reason,” co-offensive coordinator Major Applewhite said. “It is a mental block and once that gets out, then it is all about expecting oneself to be great. It is a lot of peer evaluating and making sure everybody is staying accountable.”

One of the biggest factors that has helped Walters and his offensive line change that standard is an increase in chemistry among his teammates. After injuries forced new faces to join the huddle, a sort of fluidity became evident in which any player could be called on to step in for his team.

“I think as long as the offensive line room stays where it can be fluid with whoever is in that starting lineup and not only have good relationships off the field but on the field with one another and want to see each other succeed, then that’s what its going to take for us to have that trend we got going right now,” Walters said.

To keep that trend going, Walters admits there needs to be more improvement. He said they have only three goals: win, run the ball a lot and prevent any sack.

“[We need] execution,” Walters said. “When we go watch film we’re going to look and see where the challenges are that we want to overcome and go out there and do it. The most telling sign for us accomplishing our goals is seeing how the backs end up, seeing how clean case’s jersey is and if we win or not. Those are the challenges.”