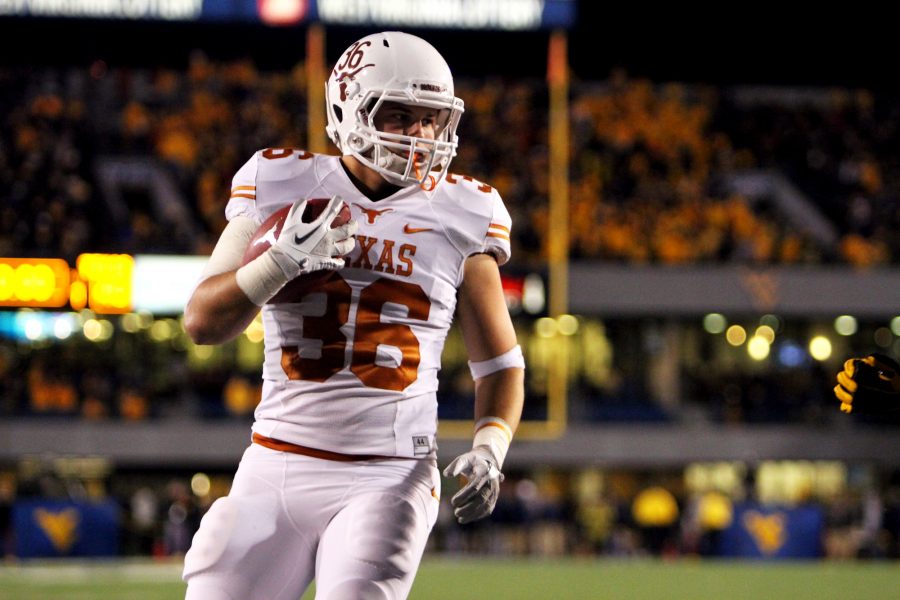 Sophomore fullback Alex De La Torre's makes his first catch as a Longhorn — which also happens to be the game-winning touchdown in overtime, as Texas beat West Virginia 47-40.

Sophomore fullback Alex De La Torre failed to record a reception in his first 15 games at Texas, but he picked a timely moment for his first.

His two-yard touchdown reception in Texas’ first possession of overtime proved to be the game winner in the Longhorns’ 47-40 over West Virginia on Saturday.

The Mountaineers had the opportunity to match De La Torre’s score in their first drive of overtime, but the Longhorns held the Mountaineers to just one yard in their final four plays after having a first and goal from the five.

Senior quarterback Case McCoy forced overtime by leading a 57-yard fourth quarter drive, capped by a 24-yard field goal by senior kicker Anthony Fera to even the score at 40. McCoy threw three touchdown passes in the second half and finished the game with 283 yards on 27-of-49 passing.

Junior wide receiver Jaxon Shipley paced Texas through the air with seven receptions for 82 yards, including his first touchdown catch of the season on a 10-yard strike in the fourth quarter.

The Longhorns continued their strong play on the ground as well, rushing for 152 yards on 41 carries as a team. Junior running back Malcolm Brown led the way with 89 rushing yards and a touchdown.

“I thought we were playing very well for a long period of time,” head coach Mack Brown said. “I give them credit, they did some things great. We made a mistake or two, but at the same time they were challenging us.”

Sophomore running back Johnathan Gray also racked up 56 rushing yards on eight carries before leaving the game with an Achilles injury, sidelining him for the rest of the season, in the third quarter. In addition, senior defensive tackle Chris Whaley will also miss the rest of the season after suffering a left leg injury in the first quarter.

The defense struggled without Whaley, allowing 399 yards of total offense while surrendering more than 30 points for the first time in conference play. Texas did manage to record seven sacks and five turnovers in the game, though.

“We just knew we had to put pressure on these guys and disrupt them,” senior defensive end Jackson Jeffcoat said. “That’s what we have to do as a defensive line and as a defense. It’s a little nerve-wracking to play in an overtime game. We work on that stuff all the time. You have to have a fast start, and then you finish the game.”

The Longhorns will now enter a stretch of games against three ranked opponents to close the season, starting with next weekend’s matchup against No. 14 Oklahoma State.