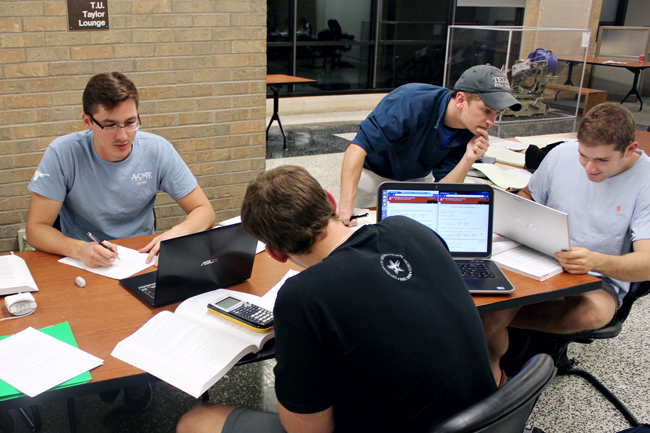 Electrical engineering students, faculty and staff will face a disruptive transition period as their operations relocate from the Engineering-Science Building, set to be demolished this summer, to the new Engineering Education and Research Center.

John Ekerdt, associate dean at the Cockrell School of Engineering, said students and faculty have voiced concerns about the transition to the center, which is expected to be constructed by 2017. Ekerdt said his department is trying to make the transition as smooth as possible.

“We’re working with all the different groups to try to minimize the impact, but there will be compromises and there will be sacrifices that a number of groups will be making during the construction,” Ekerdt said.

Even after the construction and movement process is finished, some student are worried that they won’t have a community setting in which to study and meet with classmates, according to electrical engineering sophomore Tyler Walker. While there has been an effort to maintain a lot of the department’s activities in the general engineering area, some of the study space will be lost as a result of the move.

“I’m worried about losing the [electrical engineering] community,” Walker said. “A lot of the times you build relationships with people you study with, and that comes from being in the same area. If you don’t have a support group of [other students] making it through this major will be very difficult — it’s not easy.”

During the transition, faculty will be relocated to the UT Administration Building, located at 16th and Guadalupe streets as well as the Peter O’Donnell Jr. Building, located at the corner of 24th and Speedway streets. As of now, faculty do not know who will be in which building, but faculty with research groups are more likely to be in the administrative building so their location is centralized, Ekerdt said.

Those involved with the project have begun meeting with the registrar to discuss where classes displaced by the transition will meet.

“We’re arranging to have many classes in the engineering precinct,” Ekerdt said.

Temporary offices will be located in the Academic Annex for professors and teaching assistants to have a place to meet with students, Ekerdt said.

According to junior Miranda Pacheco there is excitement about the new building but some students will miss the Engineering-Science Building.

“It’s really sad because we won’t have the third floor to study in and everyone will be in random places,” Pacheco said. “I just think it will separate us as [a department] because we won’t see each other around a certain building. It’ll probably be OK, it will just be an inconvenience.”