Updated: Man wounded, in custody after aiming handgun at police in North Campus 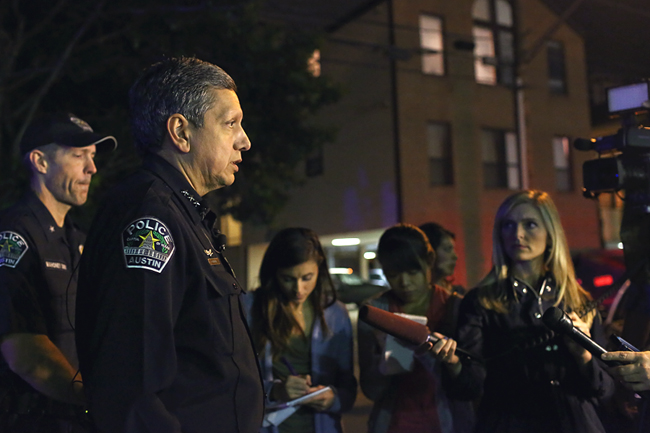 A man is wounded and in custody after pointing a handgun at Austin Police Department officers from the window of a North Campus apartment Sunday night.

Two APD officers fired at the unnamed suspect after a series of interactions through the man’s apartment window. According to APD assistant chief Raul Munguia, the subject pointed his gun, which was equipped with a laser, at the officers, before retreating deeper into the apartment and firing several shots.

After the subject retreated, the officers heard what they believed to be the man loading more weapons.

“The officers could hear what they believed was the subject loading more firearms, and another round was heard from within the apartment, but we don’t know at this point where that round went,” Munguia said.

When the man returned to the window, he pointed his laser at several APD officers’ chests, at which point two officers fired, Munguia said. One officer, whose name has not been released, believed he wounded the subject, who retreated.

“Within a few minutes, the subject in the apartment said he was bleeding and that he needed help,” Munguia said. “At that point, he came to the front door with his hands up and pretty much gave up. The officers took him into custody and helped him into the ambulance.”

Munguia said the subject, who is roughly 30 years old, is stable but received one to two gunshots in his left torso.

APD officers were called to the scene after the subject placed a 911 call to a friend. The subject said he needed help and ended the call abruptly, prompting the call’s recipient to alert the police.

Munguia said the incident took place at 2900 Cole St., which is the address of the La Casita apartments located a few blocks from St. David’s Medical Center.

“Operations at St. David’s were not impacted,” Munguia said. “The scene was contained, and we had plenty of resources that arrived on scene.”

Though a hostage negotiator and SWAT team were en route to the scene, Munguia said events unfolded so quickly, the additional resources did not have time to arrive.

The two officers who fired at the suspect will be taken off street assignments until the investigation is completed, according to APD corporal David Boyd.

“It’s just standard policy until we go through the investigation,” Boyd said. “The officers aren’t on the street right now — they’ll be put on some kind of inside desk job for a little bit.”

Laura Boria Gonzalez, a Spanish and Portuguese graduate student who lives in Dominion Apartments, on the same block as the scene, said she heard three gunshots before 10 p.m. — first one, and then two more shots about five minutes later.

Boria Gonzalez said scenes of this nature are not typical in the neighborhood, where she has lived since July.

“This is the first time something like this has happened here,” Boria Gonzalez said. “There were a few moments, I was definitely scared, but now I’m just curious.”