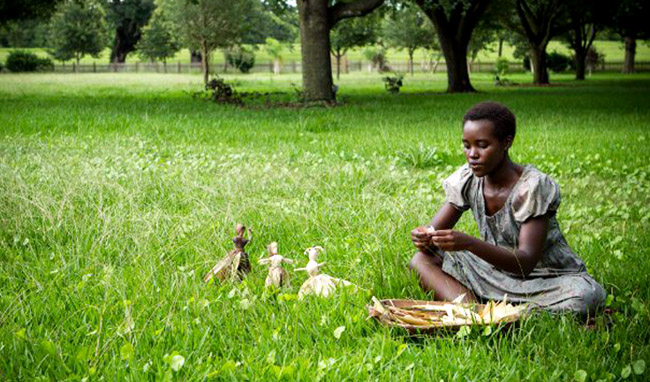 Editor’s note: This is the third installment in a series in which two Life & Arts staff writers discuss big releases that are garnering buzz for the awards season.

Lee Henry: In our past discussions, it seemed like we’d covered everything, but we somehow managed to completely miss talking about supporting actress in any sort of depth. Let’s start that off by discussing a film packed with potential candidates, “August: Osage County.” I’m assuming The Weinstein Company will be running every member of the cast in supporting categories and just hoping one or two stick. Besides Meryl Streep, the most likely nominees seem to be Julia Roberts and the superb Margo Martindale.

Colin McLaughlin: Streep is the obvious nominee here, but Martindale elevated the best role in the play to be almost on Streep’s level. “12 Years a Slave’s” Lupita Nyong’o looks to be the frontrunner in the supporting actress category, unsurprisingly. She was one of the strongest parts of one of the most well-assembled films this year. Do you see any potential upsets that could take the statue from Nyong’o on Oscar night?

LH: Oprah could run a campaign that would win her an Oscar for Lee Daniels’ “The Butler,” but it’s not likely. Still, expect her to show up in that category. Martindale’s part in “August” was a Tony-winning one, and she’s a well-respected character actress, even winning an Emmy recently for her work in “Justified.” Plus, she’s just brilliant in this performance. The film is full of over-the-top characters trying to blow each other off screen, but Martindale succeeds in being hilarious, terrifying and painfully quiet all in the same film. Roberts, in the latest of the season’s category frauds, is also going for supporting actress, which completely dashes the chances of my other favorite in the film, Juliette Lewis.

CM: I don’t see it as a case of category fraud. The theatrical nominations have always recognized Violet, Streep’s character, as a lead role. Julia Roberts also plays a lead in the film, but Weinstein probably figured that she’ll have a better chance for a nomination as a supporting actress. I’d be surprised to see Roberts make it into the race at all. She was better than I expected but she wasn’t up to snuff against the other more deserving members of that cast. Still, she’s the other big name in the movie. “August,” “12 Years” and “The Butler” are the only movies I’ve seen that look to have serious supporting actress possibilities. What else is there to look at?

LH: There are plenty of other candidates to consider here. Octavia Spencer has been the benefit of a second wind of recognition for her work in “Fruitvale Station,” and she may be the film’s last chance at a high-profile nomination. Jennifer Lawrence should be considered a contender for “American Hustle,” Carey Mulligan was funny in “Inside Llewyn Davis” and Naomie Harris’s compelling work as Winnie Mandela was the best part of “Mandela: Long Walk to Freedom.” I would like to throw my hat in the ring for Sally Hawkins, who should be nominated for her work in “Blue Jasmine.” She’s funny and poignant, providing a perfect emotional counterweight to Cate Blanchett. It may be a long shot, but if the voters like the movie enough, anything is possible. Who’s your dream pick or must-have in this category?

CM: I’ve said my piece on Nyong’o and I don’t see myself changing my position on her deserving the win. For dream picks, I actually have two: Amy Acker and and Julianne Nicholson. Nicholson, who plays middle sister Ivy in “August: Osage County,” is probably the least-known member of its sizable ensemble, but she is incendiary in the few moments the film gives her. The supporting nominations for “August” are likely going to better known players. Amy Acker plays Beatrice in my favorite movie of the year so far, Joss Whedon’s “Much Ado About Nothing.” Though she’s arguably the lead actress, the film’s ensemble cast would likely see her listed as a supporting actress if there was any chance of her being nominated. “Much Ado” won’t see much attention this year, but the way that movie makes Shakespeare’s language feel so effortless and natural is a feat unto itself, and Acker is a large part of what makes that succeed.

LH: I hate to crush your spirits, but “Much Ado” won’t get anywhere.

CM: I’m curious to see where “August” goes for the rest of the year; It won’t see a theatrical release until Christmas, and it’s rumored that the Weinsteins plan to change the horrible ending scene. It’s continually seeing positive reception on the festival circuit, but it will be overshadowed by “Saving Mr. Banks” and “The Wolf of Wall Street,” also opening on Christmas.