Upcoming musical ‘In The Heights’ to be recast following backlash 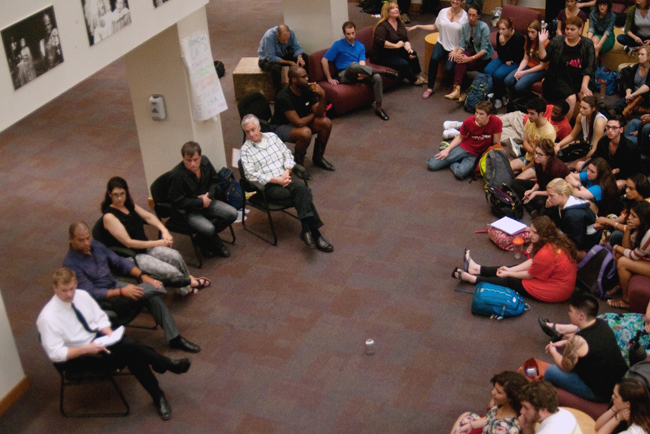 After receiving backlash about casting professional guest actors instead of students in its upcoming musical “In the Heights,” the theatre and dance department has decided to reverse its original decision and recast roles for the musical.

Brant Pope, chair of the department and producer for “In The Heights” said he has begun the musical’s recasting because the original cast did not reflect student involvement in the best possible way.

“If there’s a person responsible, it is me because I said that I wanted this to be an excelled production,” Pope said. “I didn’t say ‘do it with students [and] we’ll do the best we can.’”

Pope said the decision was not from a disregard for students, but from a desire to put on the best and most ethnically accurate production possible.

“[The director and music director] honestly didn’t know how to combine wanting to cast this with ethnic authenticity and also have really excellent musical performers,” Pope said. “They didn’t know how to make both of those work. Their answer was to seek outside people and land on the side of authenticity rather than student involvement, and that’s when I decided I couldn’t accept that.”

Danny Herman, the production’s director, was not available for comment.

Pope said the department always acknowledged the possibility of including regional or outside artists to play some of the production’s older-aged roles but no contracts were ever signed.

“You have to plan ahead,” Pope said. “The director and music director talked to the likely subjects of two or three of those very mature roles about availability but we did not sign any contracts. It was an anticipation for a couple, not nine.”

Theater and dance sophomore Ursula Walker said she hopes the department will continue to respond to student concerns.

“It shows that they care about our concerns, and I’m hoping this means that they’ll continue to consider our concerns and incorporate our ideas as they go through the casting process in the future,” Walker said.

Dominique Gonzalez, theater studies junior who plans to re-audition for the musical, said the decision to use less guest actors is a good idea.

“Giving the other five roles back to the students is a fantastic thing because now these students will get a chance to learn the roles of musical theater,” Gonzalez said.

Pope said the department believes guest actors working alongside students is beneficial to the learning process, but in this situation, it was not in the right proportions. He said the production was chosen from the season selection committee because it filled a need for the music theatre program and students.

“It is a tremendously popular title that would anchor our season,” Pope said. “‘Dial “M” for Murder’ and ‘In The Heights’ are two box office draws that will allow us to do new plays no one has ever heard of. Not only are we dedicated to our undergraduates but we’re dedicated to building a Latino component in this department. We feel that the obvious demographics in Texas mandates this.”

“Dial ‘M’ for Murder” ran from Oct. 4 to 13. The current production’s recasting is currently underway and the musical is set to premiere on April 9.

Read this Daily Texan Editorial Column about the casting of 'In the Heights'.