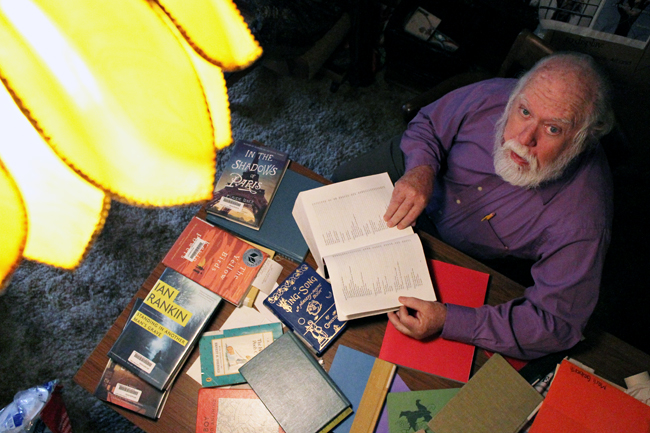 Jerome Bump has been an English professor at UT since 1970. Bump discussed his favorite novel, Toni Morrison’s debut “The Bluest Eye,” which deals with racism and incest in the Midwest. Because of the sensitive subjects explored, there are frequent attempts to ban Morrison’s debut novel from schools and libraries.

Daily Texan: What draws you to “The Bluest Eye”? What makes it your favorite book?

Jerome Bump: Two categories: how it’s written and what is in it. I think the dense, creative, poetic prose is a good example of how great minority literature can be. Indeed, at times it reminds me of Shakespeare. And the other, what’s in it, or what it does, rather. It teaches compassion and sympathetic imagination, also almost as well as Shakespeare.

DT: What stuck out about “The Bluest Eye” when you first read it?

JB: The first page is this “Dick and Jane” story, which was just shocking. It’s an indictment of education — not higher education, primary school. And then just the way it started, from the beginning. The quality of the writing is what got me.

DT: How has your perception of the book changed over time?

JB: Well, my first article on “The Bluest Eye” was about family systems, the family aspect. And then, judging by appearance is my second article, and I think that’s a more universal issue and, therefore, more powerful. And also, it directly relates to racism and multiculturalism, so I’ve become more and more aware of that. But every time you reread it, there’s always more.

DT: What do you think it takes for a book like “The Bluest Eye” to last and keep its significance through the years?

JB: Well, it’s the universal values that it embodies, and also it’s the very high quality of the writing. And when those values involve the most basic of ethics — the sympathetic imagination and compassion — I don’t see how it will ever be out of date.

DT: How would you define “sympathetic imagination” in “The Bluest Eye”?

JB: Well, the best example is, it’s similar to Shakespeare, who can put you inside the mind of anybody. This writer can put you inside the mind of a child molester, and that even Shakespeare didn’t try. And it’s just amazing. You just can’t stand the guy, but you actually begin to understand him, and that’s a tremendous accomplishment. Then she puts you in the position of Pecola, the scapegoat. And as time goes on, she involves you more and more, and you realize that you have been doing this to others, scapegoating them. It’s very much a reader involvement. The other factor I didn’t mention that really impresses me as much as Shakespeare is emotional literacy. She can really convey feelings so well, like that sofa they bought, and the impact it had, as a feeling. This, to me, is what literature can do that nothing else really can do — convey feelings.

DT: So the greatest benefit of reading is the ability to get into the minds of others?

JB: Yes, and that means that we live a much broader and much richer life because we can momentarily become someone else, someone very different from ourselves. We can become someone born two thousand years ago in a totally different place. And we can do that in the space of two or three hours by reading a book. So it’s just a phenomenal accomplishment we just take for granted, we don’t even think about it.