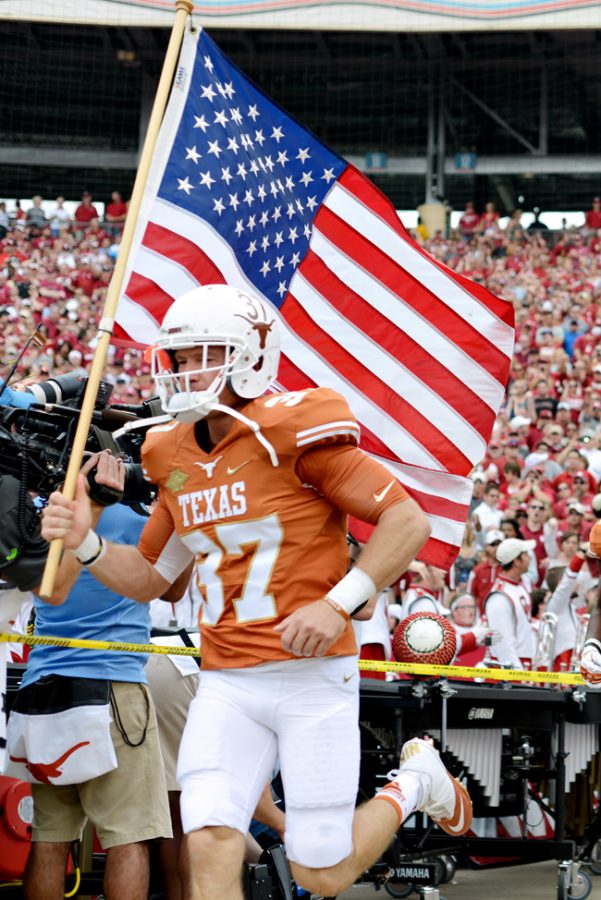 It has been more than two months since Texas has seen a number placed in front of its name. The Longhorns haven’t been ranked since they played Brigham Young University, where they sat comfortably at No. 15 before their embarrassing loss to the Cougars.

But Texas has regained a spot in the national rankings after winning six consecutive games, now sitting at No. 24 in the BCS poll. The Longhorns have had mixed success this season when playing against ranked opponents, creating a 1-1 record so far, and their upcoming game this weekend against No. 12 Oklahoma State will be their third ranked opponent this season.

The contest against the Cowboys will be Texas’ first top-25 matchup since its bowl game last December. Head coach Mack Brown pushed his players to regain their spot in the rankings to make this week a special game.

“I told [the players] before the game to win against West Virginia and to make the Oklahoma State game a special game of two ranked teams,” Brown said.

Saturday’s game at Darrell K Royal-Texas Memorial Stadium will mark Texas’ annual recognition of Veterans Day. The Longhorns are marking this contest as their veterans appreciation game and Brown said the team’s captains would represent that.

In addition to ceremonies leading up to the game, long snapper Nate Boyer, who is a veteran himself, will be presented with a ring for winning the 2012-2013 Big 12 Male Sportsperson of the Year award.

Mack Brown said Monday that he believes this weekend will be the largest weekend Texas has had this year for recruits. With many high school teams out of the playoffs, several recruits will be able to attend this weekend’s game against the Cowboys.

Texas’ six-game winning streak has also brought the Longhorns back into the mix of recruiting highly favored players after starting out the season 1-2.

“It’s got us back in the mix with some fun kids,” Brown said. “We’re out of the grave with a foot and an arm, pulling up, and we have a little air.”

Toughest part of the schedule ahead

While Texas won its last six games, it still has its toughest games ahead, facing two ranked teams in Oklahoma State and Baylor. Brown is just 38-30 against ranked opponents during his tenure at UT, while Texas is 31-19 against its last 50 ranked opponents.

In the past six games, except for Oklahoma, the Longhorns have only beaten teams in the bottom pool of the Big 12. In order to finish out the season undefeated in conference play, Texas looks to continue its defensive improvement as its final three opponents have combined for an average of 46.5 points per game this season.