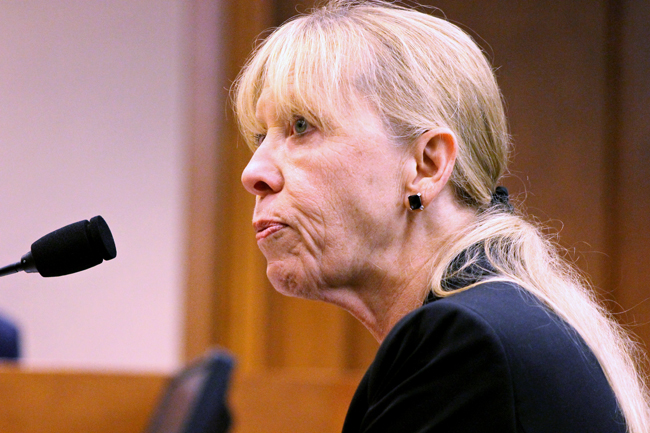 Francie Frederick, a member of the general counsel for the UT System Board of Regents, testified on the ongoing investigation of Hall’s actions as a regent Tuesday morning. In her testimony Frederick explained how Hall shared emails with FERPA-protected information.  " />

Francie Frederick, a member of the general counsel for the UT System Board of Regents, testified on the ongoing investigation of Hall’s actions as a regent Tuesday morning. In her testimony Frederick explained how Hall shared emails with FERPA-protected information.

During the complex process required to fulfill Regent Wallace Hall’s massive open records requests to the University, Hall was mistakenly given access to private student information — possibly in violation of federal privacy acts — according to testimonies of several UT System lawyers at a House hearing Tuesday.

Testimonies were given as part of the House committee’s ongoing investigation into the recent behavior of Hall, trying to determine if he overstepped his boundaries as regent.

In her testimony, Francie Frederick, who serves as the general counsel for the UT System Board of Regents, said regents must be “diligent in seeking information.” If a regent requires information protected by the Family Educational Rights and Privacy Act, they must have a valid, job-related reason in order to see it, Frederick testified.

“I’m not a FERPA expert, but my understanding is that the regent must have a legitimate educational interest to see FERPA [documents], something related to the regent’s duties,” Frederick said.

Frederick said over the course of reviewing documents, Hall came across a chain of emails he should not have been allowed to see.

“It had not been determined in advance that [Hall] had legitimate educational interest,” Frederick said. “No determination was made, [the emails] were in the files, and he saw them.”

According to Frederick, Hall saw the emails after a series of untraditional moves were made in order to fulfill his “massive requests for information.” Because Hall’s requests were so large, University employees turned documents over to System lawyers with the understanding that System employees would redact private information. In her testimony, Frederick said the System employees failed to redact such information in at least a few cases.

“If I were replaying this, we would not hand one document to Regent Hall before someone in my office actually looked at it,” Frederick said. “I think we failed him by allowing this to happen.”

Frederick said her office could not have foreseen the problems that arose as a result of the unexpectedly sizeable requests.

“I don’t think when it started out there was any intention to be disruptive,” Frederick said. “I don’t think anyone could’ve predicted the volume and the spin-off requests.”

Frederick said regents are legally barred from sharing protected documents with outside parties, even if they have demonstrated educational purposes. Despite this legal barrier, Frederick said Hall shared emails containing FERPA-protected information with his private attorneys. Though Hall was required to return the emails, no other steps were taken.

“I take it they want us to look at and to see if it’s a matter that ought to be referred to prosecuting authorities,” Hardin said after the hearing.

“The remedy under FERPA is to make a concerted effort to get the document returned, ascertain that you have gotten all copies of it and remind the individual that it was given to them in error,” Holthaus said. “The nature of FERPA is that it’s very confusing … FERPA is not a black and white kind of proposition.”

In his testimony, Daniel Sharphorn, general counsel for the UT System, directly contradicted a statement made by Kevin Hegarty, chief financial officer and custodian of records at UT.

At the first committee hearing, Hegarty said the UT System denied him the opportunity to seek outside counsel while his office was dealing with Hall’s requests. Sharphorn denied this claim at Tuesday’s hearing.

“I went through every email that I have, and I asked one of our office assistants to do the same,” Sharphorn said. “There was nothing in our systems where Mr. Hegarty was asking for outside counsel.”

Sharphorn also provided an explanation for reminding Barry Burgdorf, who resigned as general counsel in April, that attorney-client privilege was still in effect before his testimony in October.

Sharphorn said he reached out to Burgdorf at Hall’s request.

“I did not think of [Hall’s request] as a directive,” Sharphorn said. “I did it because he was right.”

At the end of the meeting, the board unanimously voted to issue subpoenas to Powers and UT System Chancellor Francisco Cigarroa. Their testimony is scheduled for Dec. 18.

Correction: An earlier version of the story misattributed a quote about reviewing a motion passed by the committee. Rusty Hardin, legal counsel to the committee, said the quote.