Now that it’s open to all majors, McCombs’ Career Expo is still a success 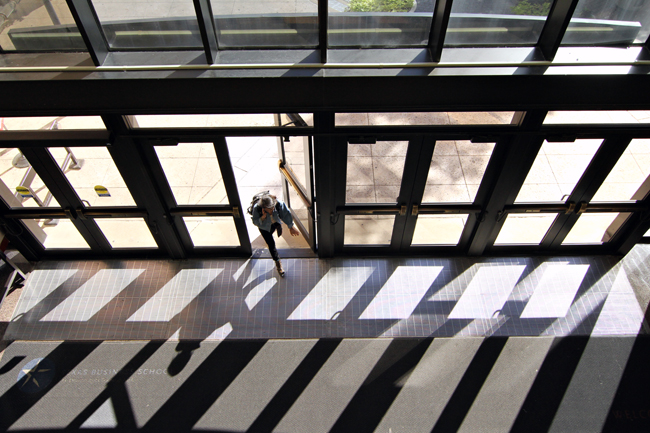 This past September, there was a palpable change in the air during the latter part of McCombs’ signature Undergraduate Career Expo. All seemed ordinary — there was the usual mass of black suits and the familiar buzz of elevator pitches — but there were hundreds of new, non-business faces in the crowd. It was the attendance of these students that had much of McCombs engaged in critical discussion about the implications of opening the Career Expo to all majors for two of the five operating hours, between 3 to 5 p.m. Now that McCombs’ heaviest on-campus recruiting season is primarily over for the year, the chatter has quieted. Though there’s no denying that many business students were concerned about opening their beloved Expo doors, there now seems to be a stigma against business majors for expressing those concerns in the first place. But that’s not a justified judgment.

At first glance, it’s difficult to understand why McCombs’ Career Expo was ever closed at all. After all, the career fairs of every other college have always been open to all majors, including business students. The Expo’s exclusivity barred non-McCombs students from accessing valuable career opportunities. In short, the exclusivity seemed plainly unfair. We’re all Longhorns after all, right?

That’s a lovely sentiment, but it also reveals a shallow understanding of the implications of opening the Expo. When you get to the heart of the argument from the business perspective, it boils down to two main points: money and McCombs’ rankings. All colleges at UT have certain tuitions they ask of their students, and most of those dollars go toward investment in resources specific to that college, such as a top-notch laboratory for the College of Natural Sciences. That laboratory, in turn, goes into CNS’ rankings, which affect a whole list of other things, including the caliber of students and professors it attracts. Similarly, the fact that McCombs is a business school means it invests in Career Services, which include its Career Expo.

Michael Daehne, a 2012 graduate of McCombs, former Undergraduate Business Council president and current Expo recruiter, told the Texan, “I don’t think it would be fair of me to go use the labs Natural Sciences chose to invest in, and the same holds true for liberal arts or communication students wanting to use McCombs’ career services.”

On the topic of money, Daehne also noted, “When this conversation comes up, many tend to ignore the fact that a) McCombs students pay higher tuition than others across campus — specifically for things like top-flight career services — and that b) McCombs itself chooses to invest more in career services programs than most other colleges on the campus. Beyond that, McCombs has historically invested more dollars in career services than the other colleges, meaning the current career programming — like the McCombs Career Expo — is the result of decades of investment by BBA students.”

The second reason opening the Expo doors was so complicated? Rankings. Top high school graduates choose which business school they want to apply to by looking at national rankings in publications such as Bloomberg Businessweek and US News, and Career Services is a huge factor in determining McCombs’ magic number. In theory, it’s a great idea to let all Longhorns have access to a Career Services as developed and talented as the one offered at McCombs. The fact is, however, that McCombs’ rankings are determined by how well Career Services serve business students, not the University.

Another major reason that business students were so concerned about reopening the Expo: When it was open in the past, recruiter feedback was poor and rankings fell. Career Services wanted to do something to improve McCombs’ rank, so they decided to close the Expo to non-business majors beginning in the spring of 2008. It stayed closed until this past spring.

Despite all the concerns, the University has seen two re-opened Expos in 2013. And as it turns out, both Expos have gone remarkably well. The Expo served 26 more employers and 794 more business students than last year, in addition to 442 non-business students. Career Services also made sure to create new workshops with the College of Liberal Arts and College of Natural Sciences that specifically addressed how to navigate the McCombs Expo.

The question remains: How did the Expo recruiters feel about non-business majors being present again?

“They notice,” BBA Career Services director Velma Arney said. “The reaction is extremely polar — 50/50 survey responses. Some employers love it, and some don’t want anything to do with it and are packing up and leaving. It tends to be companies with large recruiting teams that dislike it because they go to each college’s respective fairs already, but companies with smaller teams [that don’t attend other colleges’ career fairs] favor it because it gives them a wider reach.”

Though the arguments for why the Expo should or should not have opened were extremely compelling on both sides, BBA Career Services turned out to be well prepared and developed enough to serve the entire university’s demand. The numbers say it all. Not only are the initial concerns about Career Services being unable to serve McCombs a non-issue, but Career Services was actually able to serve more business students, and they did it even better than before.

“That’s our goal,” Arney said. “It’s more than just dropping your resume and employers selecting from all the names without a face. We want you to go to the events, go to the programs, and make those connections. While we are involved in the university-wide career services process in a way that we weren’t last year, [McCombs Undergraduate Programs] Dean Platt and I are still going to make sure the McCombs voice is heard.”

Huynh is a Plan II and Business Honors sophomore from Laredo.