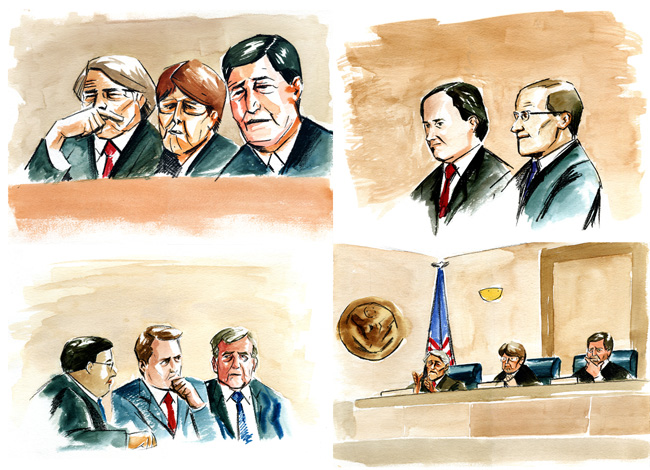 Attorneys for both the University and Abigail Fisher, a rejected UT applicant, argued over the necessity of a race-conscious admissions policy in front of the Fifth Circuit Court of Appeals on Wednesday.

Fisher sued the University in 2008 for discriminating against her based on her race, which she claimed was in violation of the 14th Amendment.

In their questions during oral argument, Judges Patrick Higginbotham, Carolyn King and Emilio Garza focused on the way the University defines “critical mass,” as well as past attempts the University has made to increase minority enrollment.

“Every attempt I’ve heard to define a critical mass has been tautological, circular or objective,” Garza said.

In describing the difficulty of defining a critical mass, Garre and the judges both made references to former Supreme Court Justice Potter Stewart’s famous quote, “I know it when I see it.”

Fisher’s attorney Bert Rein said if the University considers race in its admissions process for people who do not qualify for admission under the state’s Top 10 Percent rule, the school must provide undeniable evidence that diversity could not have been achieved through any other means.

“If you pick race, you have to be able to withstand strict scrutiny,” Rein said.

According to Garre, the University uses race as part of a much larger admissions process, and race is one of several factors that, combined, determine 4/7 of an applicant’s personal achievement index. That score is in turn combined with the applicant’s academic index score to determine if the applicant should be admitted to the University.

“One factor of a factor is race,” Garre said.

“That to me creates the stigma that [Justice Clarence Thomas] has rightly complained about,” he said.

President William Powers Jr. — who is a Harvard Law graduate and a former dean of the UT Law School — said he thinks the questions the judges asked clearly indicate they researched the University’s specific admission policies.

“The court was very well prepared on both sides,” Powers said. “The arguments were very relevant to the application of the [admissions] standard. Arguments were excellently presented.”

The University has been the center of many previous cases related to affirmative action. In 1996, Hopwood v. Texas was the first affirmative action case to strike down race as a factor during an admissions process, though the right to use race with certain qualifications had been established in Regents of the University of California v. Bakke in 1978.

Grutter v. Bollinger, a case brought against the University of Michigan in 2003, declared use of race as an admissions criteria constitutional, reversing the Hopwood ruling.

Garre argued that during the seven years between those two cases, while the University did not use race as part of its admissions process, the percentage of African-American students in the student body fell by approximately 50 percent.

Rein said the University has not made any attempts to use race-neutral admissions criteria since the Grutter case declared that using race as a factor is constitutional.

“They haven’t looked at a darn thing,” Rein said. “What they did is look at Grutter and say, ‘The green light is on.’”

Powers disagreed and said the University has been unable to achieve its goals of student diversity through processes that do not take race into consideration.

“To suggest that we have not tried race-neutral admissions policies ignores the University’s history,” Powers said in a statement. “In fact, prior to the introduction of the admissions policy being defended today, the University saw the number of minority enrollments drop precipitously or stagnate, despite more targeted recruiting, increased scholarships, the use of socioeconomic factors in holistic review and the introduction of the Top 10 Percent law.”