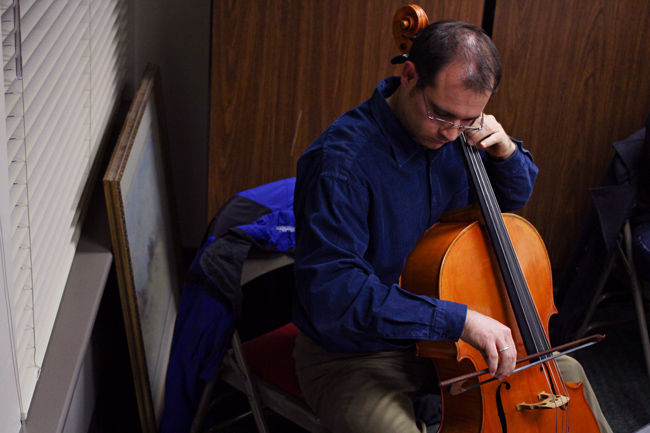 Andrew Davis practices the Baroque Cello with members of the Austin Baroque Orchestra on Wednesday evening. The orchestra is preparing for their performance which includes classical pieces from the Baroque movement. " />

Andrew Davis practices the Baroque Cello with members of the Austin Baroque Orchestra on Wednesday evening. The orchestra is preparing for their performance which includes classical pieces from the Baroque movement.

Yesterday’s popular music is tomorrow’s art music. Or at least that’s what Billy Traylor, the founder and artistic director of the Austin Baroque Orchestra and Coro Settecento, believes. Traylor describes baroque music as the popular music of the past and works to bring the sounds of the 17th and 18th centuries to modern audiences.

“You go to a recital now to hear Schubert’s ‘Lieder,’ songs for piano and voice, but that was pop music,” Traylor said. “Who knows [if] what we hear today as pop music … musicologists 200 years from now will hear as art.”

Settecento’s “North and South” concert is the ensemble’s latest attempt to expose people to baroque music. Its performances on Saturday and Sunday will feature some of the many Latin American compositions from the Renaissance and Baroque periods.

“You go to most baroque orchestra concerts and they’re going to play Handel and Vivaldi and Bach,” Traylor said. “But they just don’t play much Latin American music, and there’s a ton of it. It’s just as good and written in the same style as anything in Europe — it was just written here.”

Baroque music is distinguishable by its heavy instrumental focus. Rather than concentrating on vocals as music in the past had, the Baroque era explored the voice as an instrument in an ensemble.

“Singers are sometimes known for less emphasis on rhythm and more emphasis on the line and the continuous sound, but we have to really think about being with the orchestra at every beat,” said Phillip Bernard, music studies junior and Settecento choir member. “Sometimes we get in trouble trying to make it as beautiful as possible, but acting like an instrument is the main thing you have to think about.”

Baroque music, from countries including Mexico, Peru and Bolivia, has a strong influence on contemporary Latin music. Modern Latin music has a similar beat and tone to its baroque predecessor.

“It’s very rhythmical,” said Sarah Bates, UT alumna and baroque oboist. “It’s much like the modern music we hear from Latin America, in that a lot of it is about the groove. There are a lot of things that, when we are rehearsing, we kind of dance to.”

The orchestra was created because there were no other solely baroque orchestras in Austin, despite the city’s thriving music scene.

“The one thing I noticed that we didn’t have in Austin that they have in Houston and they have in Dallas and a lot of cities is a baroque orchestra,” Traylor said. “So through the early music ensemble at UT I met Sarah and many others. It was basically a need.”

The historical pieces being performed at the concert, such as “Matins for Our Lady, the Virgin of Guadalupe,” feature darker and warmer sounds, as well as a blended tone not present in earlier music.

“Baroque instruments were made to blend together, and as they progressed over the years [musicians] wanted different things for different instruments,” Bates said. “So each instrument has created its own character. Therefore, they don’t blend together as well anymore.”

Although it’s hard to be certain how the original instruments were constructed, musicians buy historical replicas, such as the viola de gamba and the baroque oboe, in attempt to accurately present the music of the Baroque era.

“By playing baroque music on baroque music, we’re trying to bring back to life how this music sounded to the composer,” Bates said. “By having people who replicate those instruments, by studying what we think the voice did then, by studying how different players played, we can kind of revive it.”

Bernard said this connection to history is what makes baroque music important to modern audiences.

“It gives the opportunity to reach back and connect to what was going on in the world at that time and how people were expressing themselves artistically,” Bernard said.

Traylor said the music continues to be relevant today because it still makes the listener feel something.

“It’s important to show people that, yes, this music is 300 years old, but it can move you just as much even if you don’t know what they’re saying,” Traylor said.