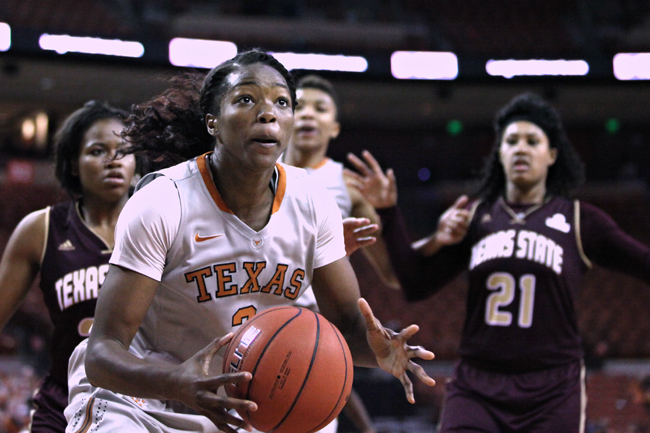 In what head coach Karen Aston called “more of a complete game” than the team’s season opener, Texas beat Texas State 96-42 in the Longhorns’ highest scoring game since 2010.

Junior forward Nneka Enemkpali combined 8-for-15 shooting from the field with a perfect mark at the line to lead all scorers with 22 points and 17 rebounds. The game marked her 14th career double-double.

“We were playing as more of a collective group tonight and able to put two games together,” Enemkpali said. “In our scrimmages, we play well on offensive but will not quite be there on defense yet, or the other way around. Tonight, we had a better showing putting the two games together.”

Sophomore center Imani McGee-Stafford returned to her starting position, and she and senior guard Chassidy Fussell supported Enemkpali’s offensive effort. The duo notched 14 and 15 points respectively. But it was the less conventional stars that brought a twist to the game.

As the clock ticked below a minute remaining in the first half, sophomore guard Celina Rodrigo sunk a three-point shot. Her 15-point effort surpassed her previous season high.

“I took what the defense gave me,” Rodrigo said. “We were able to penetrate a lot because they left the middle open.

But Enemkpali thinks Rodrigo showed more than just a response to lenient defense. She attributes Rodrigo’s performance to maturity and confidence.

“She used to take it personally when coach got onto her and she couldn’t recover,” Enemkpali said. “This year, she has a different swagger and a different confidence that you can see on the court when she’s playing.”

Toward the end of the game, an endearing crowd cheered on senior guard Helen Tau, who stepped onto the charity stripe with 16 seconds left in the game against the Bobcats. Tau never left the sideline last season, not because of poor play, but because she was serving as team manager for the 2012-13 season. But when injuries shortened the roster in the offseason, Aston gave Tau a chance. Tau notched her first collegiate point Wednesday.

“Last year, [Tau] served on a volunteer basis and her commitment level was phenomenal,” Aston said. “When we didn’t have enough players in practice to scrimmage, Helen has an opportunity to try out and did really, really well.”

Texas resumes play Tuesday at New Mexico at 8 p.m. before returning home for a Nov. 23 matchup against Stanford.