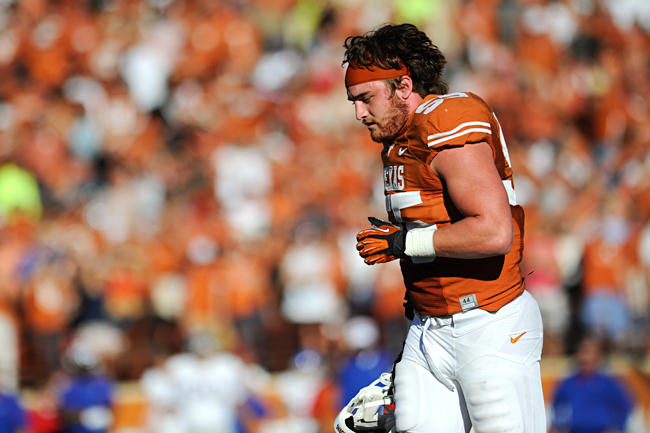 When the Longhorns’ defense scuffled in games against BYU and Ole Miss to start the season, the linebackers were at the forefront of the issue.

The same problems of missed tackles and failed assignments that plagued the unit last year seemed to reappear, and things got even worse when junior linebacker Jordan Hicks, the team’s leading tackler, went down for the season with a ruptured Achilles in just the fourth game of the season.

As the season progressed, though, these struggles became nothing more than a distant memory for the Texas linebackers, and head coach Mack Brown believes the hiring of defensive coordinate Greg Robinson after Week 2 made all the difference.

“Greg is very simplistic, fundamentally sound,” Brown said. “He starts with stats every day and works very hard on angles. It’s tackling, pursuit angles and effort [with him], and he wants to free their mind to do that.”

The biggest strides made by the Texas linebackers under Robinson came in stopping the run. After surrendering 550 rushing yards against BYU and 272 against Ole Miss, the Longhorns improved to second in the Big 12 in allowing just 123.3 rushing yards per game through their first six conference contests.

The linebackers garnered much of the credit for this defensive turnaround, as their simplified approach under Robinson allowed them to fix their early-season issues and get the most out of their talent. Senior defensive end Jackson Jeffcoat said the linebackers became fed up with the criticism surrounding them at the beginning of the year, and he believes they continue to use this as motivation.

“They were tired of hearing things about how they weren’t doing very well,” Jeffcoat said. “There were little things that had to get corrected, and they got it right. They’re playing their butts off, flying around, making plays all over the field. They just wanted to show what they could do.”

Junior linebacker Steve Edmond has been in the middle of the defensive turnaround, leading Texas with 63 tackles and seven passes defended while sharing the team-lead with two interceptions. Edmond emerged as the leader of the unit once Hicks went down, and he credits the chemistry between the linebackers for their recent production.

“It’s our pride that we put into our practice,” Edmond said. “It’s like a brotherhood we’ve got going on. We’re just always pulling for each other.”

In addition to Edmond, sophomore linebacker Dalton Santos continues to make significant contributions. Santos joined the starting lineup following the injury to Hicks, and he stands fifth on the team with 46 tackles and fourth with six tackles for a loss.

While Hicks remains unable to assist the Longhorns on the field, his impact continues to be felt. Brown said Hicks was receptive to Texas’ midseason change at defensive coordinator, and he believes the junior linebacker played a major role in getting his teammates to buy into Robinson’s scheme.

“Jordan Hicks really helped the linebackers give Greg a chance,” Brown said. “I had a good visit with Jordan and I said, ‘This guy’s got a great resume, what happened is tough, but you get the guys to buy in here,’ and he did. He’s been as instrumental in helping Greg move forward with the linebackers as anybody.”

Robinson succeeded in quickly turning around the Texas’ defense, and the improved play of the linebacker unit remains a significant reason for that. Should the linebackers maintain their high level of production, they can continue to put their slow start to the season further towards the back of their minds.