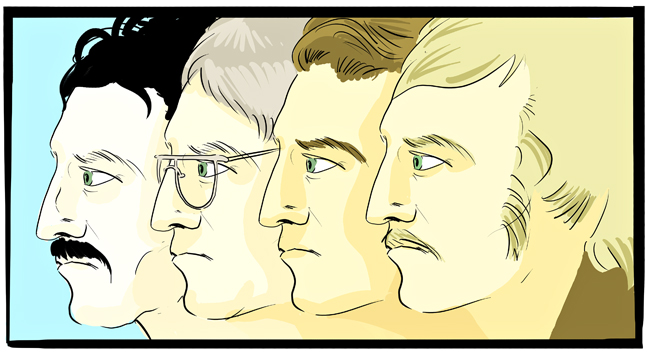 Matthew McConaughey’s career was laughable two years ago. The image of a shirtless, stoned McConaughey playing the bongos became etched in the national consciousness after his brush with marijuana possession in 1999. After a string of critical and commercial disappointments like “Sahara” and “Fool’s Gold,” McConaughey became the butt of numerous jokes.

But since 2011, McConaughey has enjoyed a slow, unstoppable turnaround in both the quality of his work and the public’s reception to it. McConaughey was not always a romantic-comedy mainstay, but began his career working for well-known directors like Steven Spielberg, Richard Linklater and Joel Schumacher and turning in performances worthy of a serious leading man.

His first significant role was the Austin-centered comedy “Dazed and Confused.” But after achieving recognition, McConaughey moved quickly toward dramatic parts in films like “A Time to Kill,” “Contact” and Spielberg’s “Amistad.” These were all well-received leading roles alongside ‘A’-list co-stars and directors, but were followed by increasingly fluffy romantic comedies like “The Wedding Planner” and “How to Lose a Guy in 10 Days.” By “Failure to Launch,” it seemed official: McConaughey was a laughing stock. “Sahara,” his first attempt at carrying a studio tent pole in eight years, did not recoup its budget and sounded the death knell for his career.

After a few more lightweight romantic comedies, McConaughey surprised audiences with 2011’s “The Lincoln Lawyer.” While the critical consensus was “good but not great,” McConaughey received praise across the board and the film was financially successful. A year later, McConaughey came roaring back with roles in Richard Linklater’s “Bernie,” William Friedkin’s “Killer Joe” and Steven Soderbergh’s “Magic Mike.” All three played to McConaughey’s strengths, allowing him to utilize the Texas drawl and southern charm he is so famous for.

The pitch-black comedy “Bernie” reunited McConaughey with Linklater, the director who made him a star with “Dazed and Confused.” Watching McConaughey spit out the words “Les Miserables” like they were poison was comedy gold, but that was just the beginning of the actor’s incredible comeback. “Killer Joe” was another dark comedy involving murder, mayhem and fried chicken, and McConaughey walked the line between charming and chilling so effortlessly it feels like watching Robert Mitchum in “Night of the Hunter.”

“Magic Mike” proved to be the clincher. As veteran stripper Dallas, McConaughey owned the best parts of the image he spent the past decade accidentally cultivating, displaying genuine range while subtly acknowledging his past as a frequently shirtless sex icon.

“Bernie” and “Killer Joe” were small, independent films that made modest returns, but “Magic Mike” netted $167 million on a budget of just $7 million. All three garnered attenntion for McConaughey. Combining all three performances, he won Best Supporting Actor awards from the New York Film Critics Circle, National Society of Film Critics and Independent Spirit Awards. Before that, his last major award was an MTV Movie Award from 1997 for Best Breakthrough Performance in “A Time to Kill.”

Twenty years after “Dazed and Confused,” McConaughey has engineered something most people in entertainment only dream about: a second chance. In 2013, he starred in “Mud,” another gritty, southern-fried thriller with shades of Tom Sawyer that earned him scores of praise and comparisons to Paul Newman. He ends the year with two Oscar contenders, “Dallas Buyers Club” and “The Wolf of Wall Street.” The former is a role for which he is expected to receive an Oscar nomination, and the latter is a film by one of cinema’s highest regarded filmmakers, Martin Scorsese.

Critics have dubbed this period from 2011 to the present the “McConaissance,” and it’s hard to argue with that. Over the past two years, McConaughey switched effortlessly from thriller to comedy to biopic. He’s reasserted his bank-ability as a leading man and turned in award-winning supporting performances.

Next year, McConaughey will star in Christopher Nolan’s latest film, “Interstellar,” and co-star with Woody Harrelson in “True Detective,” a miniseries for HBO. American celebrity culture does not give many second chances, but it’s clear that McConaughey isn’t wasting his.